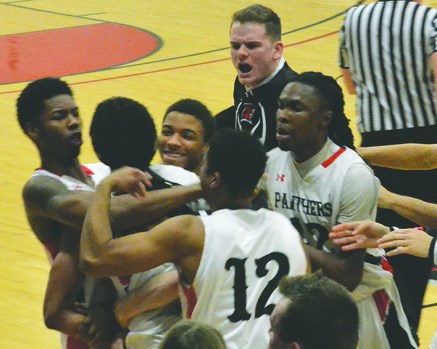 LAGRANGE – There was no hesitation.

In the waning moments of Saturday’s thrilling game at Mariotti Gym, Jay Bowyer of Maryville missed a pair of free throws, and Michael McCauley pulled down the rebound and passed the ball to Alex Bonner.

With his team trailing by two, Bonner sprinted down the court, and he beat the Maryville defense to the basket and scored, and he was fouled on the play, pulling his team even with three seconds to play.

Bonner then made the free throw to complete the three-point play, and give the Panthers the one-point lead.

Maryville missed a desperation shot at the buzzer, and LaGrange College walked away with an 87-86 victory.

The Panthers were fighting behind most of the game, and they were trailing by five points with less than a minute to play, but they found a way.

“We played like we wanted it today,” said senior Justyn Olson, who led the Panthers with 19 points.

The comeback was completed when Bonner sliced through the Maryville defense and delivered the dagger.

“I can’t say enough about Bonner,” Olson said. “He’s big-time. He missed the two free throws, and I could see it in Bonner’s eyes, he’s not being denied. He had a great game. I’m always confident when Bonner has the ball. He’s an unbelievable player.”

“Just a phenomenal job by Alex Bonner,” Wallace said. “He was one of our leading scorers but also rebounded and did the little things, then had the big finish at the end of the game to put us over the top, just a great game for him.”

The Panthers trailed 44-33 at the half, and after getting within three early in the second half, the Scots seemed to regain control and they were up by 12 with 14 minutes remaining.

The Panthers kept the Scots within reach, though, and they got within two with a little more than two minutes remaining.

Olson scored with 40 seconds left to get the Panthers within three, and then with 12 seconds remaining, Bonner made two free throws to make it a two-point game.

Bowyer was quickly fouled, and he missed both free throws, setting up Bonner’s heroics.

After Bonner scored, he still needed to make the free throw, and his shot found nothing but net.

“Making the free throw was a big thing for us,” Wallace said. “We’ve had trouble from the free-throw line and staying consistent there, and him making that was big for us.”

That the Panthers would be in a position to win was in doubt after they struggled in the first half, but they turned things around in a big way in the final 20 minutes.

“It was kind of ugly, first half, but we knew we could play better,” Olson said. “So, we started battling back, started fighting back, and we got a couple of loose balls.”

Olson could sense the confidence level of everyone on the team rise as the game went along.

At one point in the second half, Olson said “looking at everybody, I knew we weren’t losing this game. Plain and simple, we’re not.”

Wallace said the Panthers weren’t as careless with the ball in the second half, which made a big difference.

“We turned the ball over 12 times in the first half,” Wallace said. “It’s hard to recover from that. But then we turned around and only turned it over three times in the second half. We also upped our tempo a little bit. We wanted to stay in a pressing-type situation, and turn them over, which I felt like we did. And we converted on those turnovers, which is a big help for us.”

“It was just our weekend this weekend, what a great time it was in Mariotti. “ Wallace said. “We always struggle on which team will show up, so we wanted to break the game into five-minute games and I felt like we the majority of those games today.”

The Panthers built an 18-point lead in the second half, and the Lions got as close as one with 11 seconds left.

The Lions got the ball back and had a chance to win it, but a 3-pointer missed, and the Panthers got the rebound.

Vanderbrook made two free throws to push the lead to three, and Olson stole the inbounds pass to clinch it.