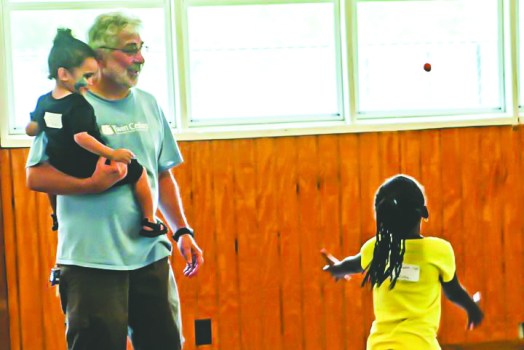 Mike Angstadt, executive director of Twin Cedars Youth and Family Services, plays with young campers at Camp Viola during the Mommy and Me camp for teenage mothers and their babies. (Photo: File) 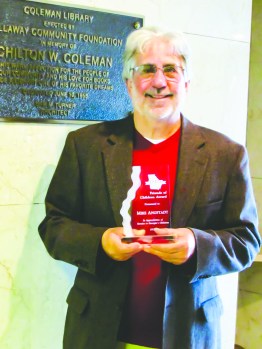 Mike Angstadt holds his recent honor: the Friends of Children award. His hard work was recognized on Wednesday in Atlanta by the Georgia Professional Service Association. (Photo By: Melanie Ruberti | Daily News)

By Melanie Ruberti
Melanie.ruberti@lagrangenews.com
LaGRANGE – When Twin Cedars Executive Director Mike Angstadt began his illustrious career with the organization in 1995, there were only three group homes for children and one service program.
Twin Cedars Youth and Family Services total operating budget was about $5 million dollars.
Twenty-two years later, the group boasts seven residential homes and 28 service programs, such as Safe Families for Children and Circle of Care for teen mothers.
The agency’s budget also quadrupled during that time – from $5 million to $17 million dollars, Angstadt said.
The executive director said the increased funding was due in large part to the formation of the Twin Cedars Foundation in 1998. The group kept the budget viable and growing in reserves, which meant Twin Cedars could expand its services and positively impact more lives.
“We expanded geographically into Opelika, Alabama and Macon,” Angstadt said. “The number of lives we touch year grew exponentially from 50-100 children per year when I started to more than 2,000 per year now.”
Angstadt’s passion in life has always been to help children in need. A recent retirement dinner held in his honor showed him the amazing impact he made in those kid’s lives.
“A long time ago, I helped out a youngster when he was about 10 years old,” Angstadt remembered. “He was at the dinner and is now a deputy and lives in Manchester with his wife and children … He is just one example of a youth whose life was changed through our services. Twin Cedars helped him become a great dad and husband and now provides a meaningful service to our community.
“My staff and I want to be a friend of the children … sharing agape love with children, teens and families,” he added.
While helping the community is Twin Cedars main priority, Angstadt also takes good care of his staff. Each year, he would send every employee a birthday card and an anniversary card of their official start date at Twin Cedars. Inside the cards, Angstadt would write a personal note of gratitude to each staff member.
Two years ago, the executive director started ‘Twin Cedars University,’ a program that ensures the staff is equipped with the right tools to carry out the organization’s mission and vision. The university includes training, but also team building excursions.
“What’s so nice about Mike is he is a great mentor,” stated Twin Cedars Deputy Director Sheri Cody. “He had a vision he was willing to share with others. It wasn’t just a feather in his cap .. he included me in strategic meetings and mapping out the future of the organization. He (Mike) did a great job to make sure I feel like I’m in a good position to also move forward.”
The ability of Twin Cedars to care for children and families sometimes exceeded the county limits. Angstadt has been instrumental in lobbying on behalf of children and foster families at the Georgia State Capitol. He’s also written dozens of grants to help fund new programs within the organization.
Angstadt’s hard work was recognized on Wednesday in Atlanta when the Georgia Professional Service Association honored him with the 2017 Friends of Children award.
The executive director’s work with the Council on Accreditation, which reviews public and private human services agencies, among other organizations, was celebrated last summer in New York City. Angstadt was presented with the 2016 Consuelo Foundation Peer Reviewer Award, an honor only given every four years. The winner is chosen from dozens of candidates from around the world.
While the recognitions are nice, it is not the accolades Angstadt said he will miss the most. It is the people.
“I’m going to miss the kids, the families and the staff,” he stated. “I remember during one of the ‘Mommy and Me’ camps we held for teen moms and their children, one little boy just latched on to me. How do you replace the look in a child’s eye, a smile on their face and the arms open, ‘pick me up’ non verbal request from them? There’s nothing that comes close to it.”
Angstadt’s last official day was Friday.
Sheri Cody has been named as his successor. She will begin Monday.
Melanie Ruberti is a reporter with LaGrange Daily News. She can be reached at 706-884-7311, ext. 2156.