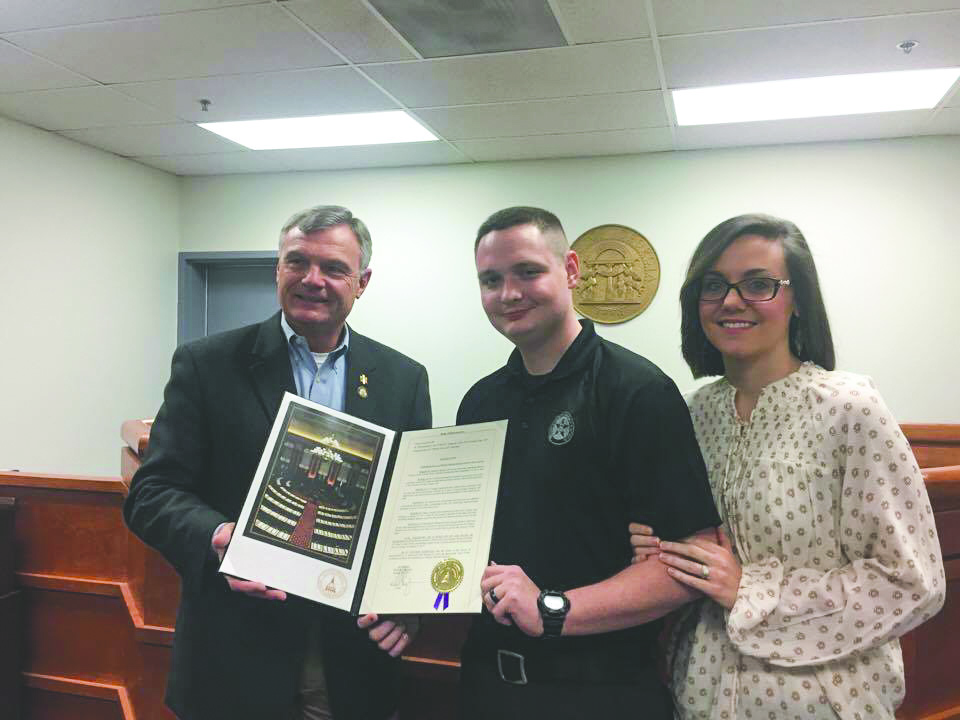 Troup County Sheriff’s Deputy Michael Hockett, center, receives a proclamation from state Rep. Randy Nix, left, along with Hockett’s wife Jessica, at a ceremony Monday at the Troup County Sheriff’s Office. Nix recognized Hockett on the state House floor after he was injured in a shootout with a man near West Point on Jan. 9. Photo by Jennifer Shrader | Daily News

Troup County Sheriff’s Deputy Michael Hockett has been back on the job for about two weeks.

“I’m trying to get back in the groove,” he said. “My shift has been supportive of me.”

Hockett says he’s been out on the road, and back in the general area of the first block of Jackson Street near West Point.
He’s not been back to the house.

It’s the house where he went to perform a welfare check Jan. 9 on Matthew Edmondson, 28. Edmonson wound up shooting Hockett several times with buckshot after the deputy entered the property. Hockett shot back, wounding Edmondson in the shoulder and setting off a standoff with law enforcement that lasted more than six hours before Edmondson surrendered.

By that time, Hockett had already been treated and released from the hospital.

He knows he’s lucky, though, and so does his boss, Sheriff James Woodruff, and anyone else who has seen the dash camera video of his interaction with Edmondson. When state Rep. Randy Nix, R-LaGrange, saw the video, he immediately went to the state House floor to talk about Hockett.

“I did what we call a morning order,” said Nix, who came to the sheriff’s office Monday to recognize Hockett in person. “I said (to the fellow members of the House) ‘You need to realize what these officers put themselves into every day.’”

At the end of his speech, Nix said all 180 members stood and gave Hockett a standing ovation.

Nix said he hasn’t done many resolutions in honor of people in his 11 years in office, and in coming to the sheriff’s office, he wanted to honor all the officers, not just Hockett.

“Where his name appears, your name could be filled in,” Nix said to the more than dozen officers who filled the room. “Just as he did it, you would do it as well.”

Since the incident, Woodruff said he’s changed some protocols for his officers. Instead of just one officer going on a welfare check, now two go.

“Most all calls, we send two cars now,” Woodruff said “You never know when something minor could turn into something major.”

Woodruff said the investigation of the incident has been turned over from the Georgia Bureau of Investigation to the district attorney’s office, which has issued a preliminary finding saying Hockett was justified in his action that day.

“He did everything exactly as he was taught,” Woodruff said. “We are thankful it turned out like it did. This time it was Michael. There will be a next time.”

Hockett says he’s glad to be back at work and have the incident behind him, along with some of the attention it’s brought to the normally quiet and reserved officer.

“This is the best job in the world, and I wouldn’t trade it for anything,” he said