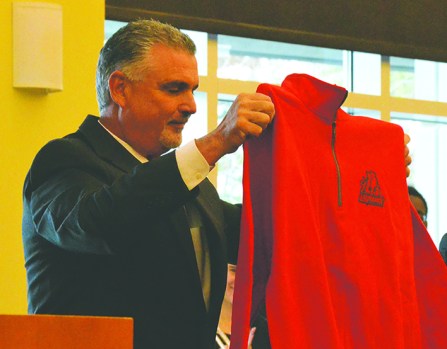 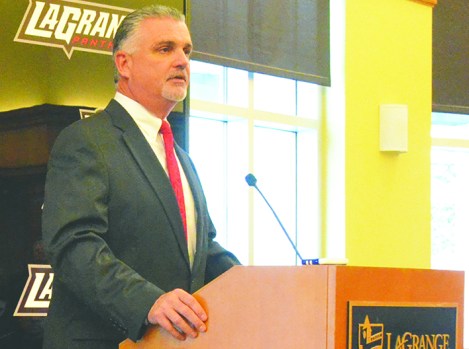 LAGRANGE – He’s been a part of so many special moments at Callaway Stadium over the years, primarily as the head coach of the LaGrange Grangers.

Now, Steve Pardue is ready to start creating some new memories, this time on the collegiate level.

Pardue is the new head football coach at LaGrange College, and he was introduced during a ceremony on Tuesday.

“We know a lot about LaGrange College, but I’ve never been on this side of it, and I’m really excited,” said Pardue, who was accompanied by his wife Pam during Tuesday’s ceremony. “I believe God put you in certain places in your life at certain times. I became able to retire about a month

ago, about the time this job came open. You have to feel that fate was involved. I’m really excited.”

As the search process unfolded, LaGrange College athletic director Jennifer Claybrook said Pardue, who won his 200th game as a high-school coach last fall, was the clear number one choice.

“There were a number of great applicants, but this person we’re going to introduce to you today stood head and shoulders above the rest,” Claybrook said.

Claybrook added that “this is an incredible moment” for the program.

“When we started this process, back in December, we knew what we wanted in a football coach,” Claybrook said. “We knew that this football program deserved such a great, incredible leader for this team. This team has so much promise, so much greatness in them. And we know they’re going to be an incredible team moving forward, and we wanted to put them in the best hands possible.”

Pardue, a native of Kentucky, came to LaGrange in 1991 to be an assistant coach at LaGrange High, and he was a part of a team that went 15-0 and won a state championship.

In 1994, Pardue took over as the Grangers’ head coach, and he remained in that position through the 2010 season.

After a two-year stint as an assistant coach at the University of Kentucky, Pardue returned to the high-school level as the head coach at East Coweta, and the team went 24-9 from 2014 to 2016.

Mumme arrived at LaGrange College in 2013 as the offensive coordinator, and he took over as head coach with three games remaining in the season.

“We are going to go to work,” Pardue said. “We’re going to work really hard, and we’re going to have a vision. I wanted to be a part of this college. Not just the football program, but all the athletic programs.”

While Pardue does have some experience as a college coach, he has spent most of his career on the high-school level.

“I’ve got a lot to learn,” Pardue said. “I told them that in the interview. I’m confident in my ability to run a football program, but I do have to learn. That’s where the coaches I’ve met so far have been so good. I like them, and I hope we can get the staff in place as soon as we can.”

While the Panthers have struggled a bit from a win-loss record perspective the past few seasons, Pardue said he’s committed to putting a winning team on the field this fall.

“I hate when somebody says you’re rebuilding,” Pardue said. “What does that tell your seniors? So, we’re not going to try to rebuild, we’re going to try to get it going as fast as we can.”

As for what kind of team fans can expect to see, Pardue said “we’re going to be a very physical, aggressive defensive football team. We’ll put a lot of emphasis on our special teams, and try to control the ball offensively.”

Pardue’s coaching journey began at Fayette County High, and he then made stops in Albertville (Ala.) and Crittendon County (Ky.) before arriving in LaGrange in 1991, just in time to be a part of a team that was anointed the best in the country by USA Today.

Pardue’s most success at LaGrange High came during a remarkable stretch from 2001 to 2008 when the team won three state titles, made two other trips to the final four, and reached the elite eight another year.

In 2004, LaGrange capped a 15-0 season by beating Washington County for the state championship at Callaway Stadium.

Last season while at East Coweta, Pardue returned to Callaway Stadium and led his team to a win over East Coweta.

“I told the kids, I have so many fond memories at Callaway Stadium,” Pardue said. “So I look to build on those, and make some bigger ones.”