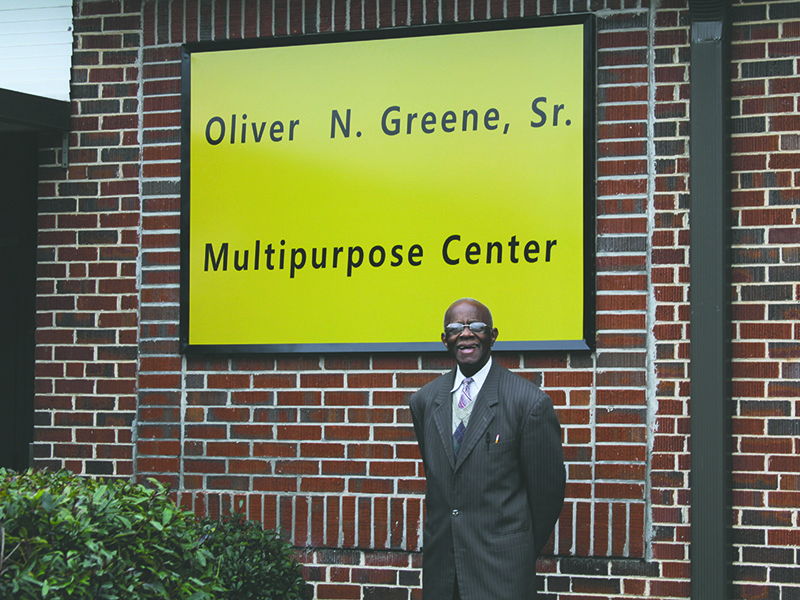 Oliver N. Greene, Sr. stands outside the building that was recently renamed in his honor. (Photo by Alicia B. Hill | LaGrange Daily News)

LaGRANGE – Locals driving by the former Cannon Street Elementary School are likely to see a steady stream of activity and notice a new name on the building.

Cannon Street School was renamed in a unanimous vote by the city council back in December to honor Oliver N. Greene, Sr. who has spent most of his life trying to improve lives of children in the community, first within the school system, and following his retirement as the head of the Alpha Multi Purpose Center. The name was only recently unveiled.

Greene said he was greatly honored by the renaming of the facility where he continues to work to improve the lives of local children.

“Having served at the schools – and as a school teacher – I recognized a need for some of our children, so that is how this started,” said Greene.

Greene worked in the local school system for 37 years prior to his work with the Alpha Multi Purpose Center, and in that time, he has touched the lives of countless children within the community, including local community leaders.

“I think he has been a very influential role model for the community,” said LaGrange Director of Community Development Alton West, who volunteers at the center. “… He has been a role model for a number of years for students, young folks of all races, all ages and he continues to be.”

Greene expressed his thanks to the city for the naming, but for him, the programs and the children they help are the most important part of what he does in the center that now bears his name. The former school is the home of the Boys & Girls Club of West Georgia and other programs.

“There are many activities that have occurred as a result of our being here (in the building),” said Greene. “We’ve been organized as a non-profit organization… since 1994. At one time, we occupied the old Dawson Street School… but the physical condition of the building was decaying.”

When Dawson Street began to suffer from the effects of its age, one of the Alpha Multi Purpose Center’s board members requested that the city allow the group to use the recently vacated Cannon Street School for the community service activities the group sponsors.

The center is funded through grants which besides keeping the center and its programs running, also make it possible for the group to take local children on educational trips.

“We take educational tours – we take the kids on tours,” said Greene. “We’ve been to Atlanta. We’ve been to Montgomery. We’ve been to the Rosa Parks Museum. In Atlanta, The (Center for Civil and) Human Rights museum and the College Football Hall of Fame.”

These trips expand the horizons of the students who in some cases might not be able to visit these educational locations otherwise, but that is not the group’s only goal.

“Our main (goal) of course has been to help kids prevent themselves from becoming drug addicts and participating in drugs,” said Greene. “… Teen pregnancy is another problem that we’ve been working with.”

The group also works with the Alpha Phi Alpha Fraternity to take the children who visit the center to an educational workshop in the summer. Those workshops are also funded through grants.

The building’s new name was officially announced on Jan. 21 at a fundraiser for the Theta Tau scholarship that has been awarded to two students annually since 1964.