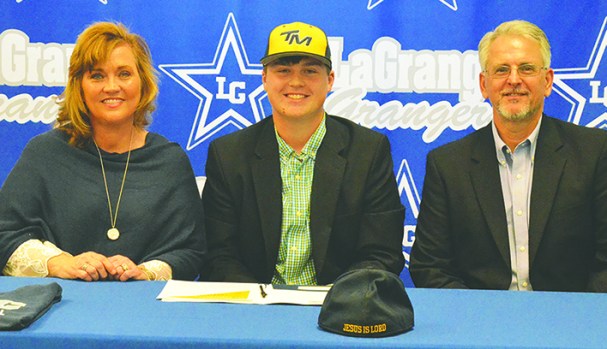 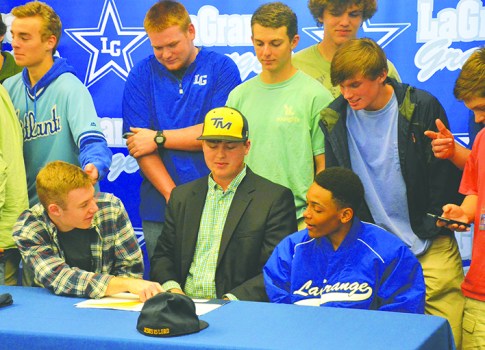 LAGRANGE – He’s getting his shot.

LaGrange High’s Hunter Plant has long had the goal of one day becoming a college-baseball player, and he’ll soon get a chance to make that a reality.

Plant, a senior, has signed a letter of intent to play baseball at Truett-McConnell, and a signing celebration was held in his honor on Monday in the LaGrange High media center.

“This is one of my favorite things to do as a coach,” LaGrange head coach David Smart said. “We talk a lot about what we do is being in the dream business. And Hunter Plant is somebody reaching a goal, reaching a dream that they’ve set out for.”

Most of the members of the LaGrange baseball team were there for the signing ceremony on Monday, and that made the event that much more meaningful for Plant.

“This group of guys, they made it fun,” Plant said. “All that hard work you put in, you do it for those guys. You don’t do it for yourself, it’s a team effort.”

When Plant told Smart he wanted to play college baseball, the two set out to find the right fit.

Smart put Plant in touch with Truett-McConnell head coach Mike Croley, and the recruiting process went quickly after that.

Plant went to Truett-McConnell for a workout and a sit-down meeting with Croley, and soon after he received an offer to join the team.

“I called him on a Saturday, and coach Croley said bring him up here on a Monday,” Smart said. “We got him up there on a Monday, and (Croley) called me back that Monday  night and said he’s everything you said he was coach. I said your team will do nothing but become better with Hunter Plant on there. And I don’t think there’s any better compliment you can give any person. And that’s what Hunter does.”

Plant liked everything about Truett-McConnell, and he said “their Christian belief just fits.”

Plant is a first baseman, and he figures to occupy a key role on a team that has high expectations this season.

LaGrange begins its season with a home game against Northside-Columbus today.

“This is it,” Plant said. “This is the final go-around. This team, we’re taking it a game at a time, and it starts tomorrow. And we’ll go from there.”

Smart said Plant has dedicated himself to being the best he can be.

“He works incredibly hard at his craft, and has worked himself into being an even better baseball player,” Smart said.

OF NOTE: Three other LaGrange High student-athletes also announced their college decisions on Monday. Jordan Ragan is going to play football at LaGrange College. Two soccer players also signed their letters of intent. Hannah Asbell is going to Georgia College and State University, and Maddie Patton signed with Young Harris. I’ll have more on those signings later in the week. For photos from each of the signing ceremonies, check out facebook.com/LDNSports