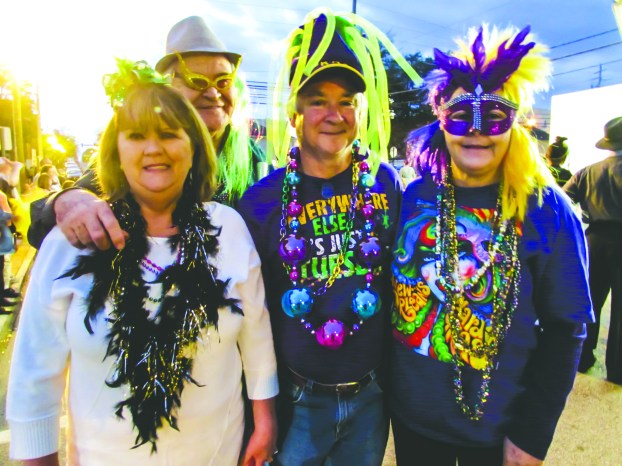 David and Donna Brown (far right) and friends were decked out in colorful shirts, hats, beads and socks for the inaugural Mardi Gras parade in downtown LaGrange. (Photo By: Melanie Ruberti | Daily News)

LaGRANGE – A popular New Orleans tradition made its debut down the streets of LaGrange on Saturday night.

The inaugural Mardi Gras Around the World parade glided past people of all ages bringing with it an intense energy and overwhelming enthusiasm.

Brightly decorated floats showcased the traditional Mardi Gras colors of purple, gold and green. The floats were filled with people – some wearing bold and dazzling tunics and elaborate masks.

Folks on the floats threw out handfuls of beads, coins, candy and more to spectators, especially children, watching the parade from the sidewalk. Bags were handed out so children could keep all their goodies together – though most proudly showed off their collection of beads around their neck.

“He had them on, but he took them off and started eating the candy after the beads started getting too heavy,” laughed Robin Daniel about her young son, Hudson.

Some folks came dressed and ready for the occasion.

David and Donna Brown were decked out in Mardi Gras attire: from the hats on their heads to the socks on their feet.

“When you go to New Orleans for Mardi Gras, you get colorful socks and beautiful beads,” Donna explained. “I’m so excited LaGrange is going to have this fun parade here … Mardi Gras is just a fun party.”

Donna was well versed in Mardi Gras traditions – she attended the annual celebration in both New Orleans and Pensacola, Florida. The Browns brought their own sack full of masks and beads to hand out to other people on the street.

Pat and Charles Nelson, of Gautier, Mississippi, have attended Mardi Gras since 1980 and were crowned ‘King’ and ‘Queen’ of their krewe.  This year, the couple decided to see what LaGrange had to offer. The Nelsons staked out their spot along Ridley Avenue around 1 p.m. on Saturday and sat under a tent enjoying the festivities until the parade began.

“We wanted to help spread the Mardi Gras spirit,” explained Pat. “We brought food with us too … shrimp, crawfish and a King cake. It’s really a family parade … one day, this parade (LaGrange) will be big. There’s a lot of spirit … it’s fun. Everyone is having fun.”

“You got to start somewhere,” said Charles.

Charles’ brother, Julian Carter, drove down from Lithia Springs to watch the parade with their family.

It was a sentiment shared by many folks who attended the Mardi Gras parade in downtown LaGrange.

“I love it,” said Robin Daniel. “I like the family atmosphere and the music. It’s been a good inaugural event.”

The Mardi Gras Around the World parade was organized by the local Krewe of Mask organization. The event also featured a party the same night at Del’avant.

The power of ‘puppy love’