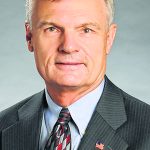 We returned to the Gold Dome on Tuesday, Feb. 7 to begin another eventful week of the legislative session which included a full schedule of House committee activity and hearings on many important topics. With a month of session behind us, many bills are beginning to make their way out of their respective committees and onto the House floor for a vote, and this week, my colleagues and I saw the passage of several significant bills that would better the lives of the citizens in our state.

The 45th Annual Firefighters Recognition Day was held on Feb. 7. It was a privilege to recognize these heroes from our communities and pay tribute to their dedication and selflessness. One measure that the House passed this week with overwhelming, bipartisan support was House Bill 146, legislation that would greatly benefit our firefighters. HB 146 would require fire departments to provide and maintain adequate insurance coverage for Georgia’s firefighters who have served on-duty at their department for 12 consecutive months, have been diagnosed with cancer and are disabled and unable to continue to work as a result of that cancer. The insurance benefits would include a lump-sum benefit of $25,000 or $6,250 based on the severity of the cancer. Additionally, if the firefighter is not able to perform his or her duties because of their diagnosis, a monthly benefit equal to 60 percent of the firefighter’s monthly salary at the time of diagnosis, or a monthly benefit of $5,000, whichever is less, would begin six months after the firefighter has submitted proof of their diagnosis and would continue for three years. HB 146 would also provide coverage for volunteer firefighters who are unable to work due to a cancer diagnosis. Under HB 146, volunteer firefighters would receive a monthly benefit of $1,500 for the same three year period.  Additionally, HB 146 would allow firefighters to maintain their insurance coverage upon retirement or a career change, but he or she would be responsible for paying insurance premiums in those scenarios. The bill would authorize counties and cities to use tax revenue to purchase insurance for firefighters covered under this bill.  Due to the nature of this line of work, firefighters are increasingly exposed to cancer-causing carcinogens, and studies show that firefighters have higher rates of certain types of cancers than the rest of the population. I was proud to vote in favor of legislation that provides Georgia’s firefighters with the benefits they deserve for their fearless actions that protect us all.

Since agriculture is the biggest industry in Georgia contributing an estimated

$74 billion a year to our economy, any legislation we consider that affects it is important.  This week, the House overwhelmingly passed HB 172 which states that the Georgia Department of Agriculture would enter into agreements with the federal government for guidelines regarding standards and labeling. This would streamline specifications and ultimately improve the way our state handles agribusiness.

In order to keep our state running ethically and efficiently, we must have qualifications in place for our judicial branch of government. HB 126 passed unanimously which would re-establish a Judicial Qualification Commission for the purpose of overseeing the state’s judicial system. The commission would have the authority to discipline or remove a judge for unethical or unlawful conduct after a formal investigation. In addition, HB 88 would revise the qualifications for Supreme Court judges and states that judges must be in good standing with the State Bar of Georgia or face removal from the bench. These bills underscore that integrity is of utmost importance within our judicial system and on all levels of government for the betterment of our state. Both bills passed unanimously and move on to the Senate for deliberation.

Two business related bills passed the House this week-HB 64 which addresses the fair compensation of insurance agents and HB 39 which would revoke a real estate agent’s license for certain offenses, such as inflating the appraisal of a home for sale. Both of these bills are designed to maintain good business practices in our state and are headed to the Senate for consideration.

I value your input as I strive to represent you to the best of my ability. Please contact me at (404) 656-5146 or by email at randy.nix@house.ga.gov. Thank you for placing your trust in me!