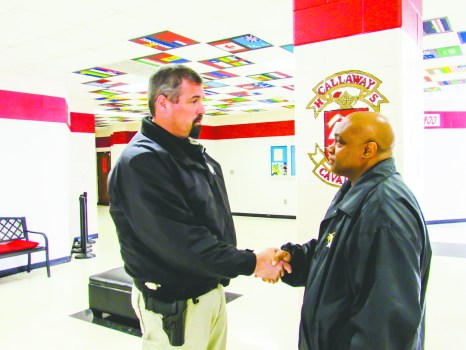 TCSO Deputy and Callaway High School SRO Todd Johnson welcomes his replacement former Meriwether County Deputy Alvis Sullivan. Johnson is leaving the sheriff's office after four years of service. While he enjoys being an SRO, the lack of pay forced him to find a higher paying job. (Photo By: Melanie Ruberti | Daily News) 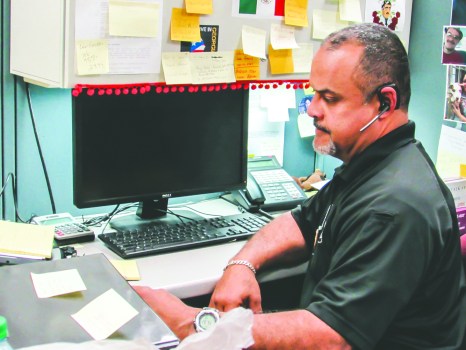 TCSO Investigator Jorge Olmo-Novoa works on a pending case. Olmo-Novoa is a part of the Criminal Investigation Division. But he also works 2-3 part time jobs along with his full time position at TCSO, just to make ends meet. (Photo By: Melanie Ruberti | Daily News)

Johnson always had a cheerful demeanor when he strolled the hallways; asking teens how their day was going while moving them along to their next class.

It is a job Johnson loves, but sadly cannot afford to keep.

“This was one of the hardest employment decisions I’ve ever had to make,” he stated.

Tuesday was Johnson’s last day as the SRO at Callaway High School – and as a full time deputy with the Troup County Sheriff’s Office. He took a new job as the safety coordinator at MIDA Automotive, a division within Kia.

“I love my job as a SRO and with the Troup County Sheriff’s Office, but when I can’t pay half my bills, it’s time for me to look for something else,” Johnson stated. “… That’s very frustrating when you love what you do, you’re dedicated to your job, you win ‘Deputy of the Year’ … but you’re a public servant and feel under-appreciated because of what you’re getting paid. It’s heartbreaking.”

Johnson, a single parent of two daughters, was with TCSO for four years. During that period, he also worked as a part-time floor and tile installer, an attendant at the River Mill Events Center in Columbus and off-duty security jobs during school events – in addition to his full-time job as the SRO.

Sadly, he’s not the only deputy at TCSO working multiple positions.

Jorge Olmo-Novoa has worked part-time assisting with home repairs, ran a security detail at a local grocery store and patrolled as an officer with the Grantville Police Department. He held those roles in addition to performing duties in his full-time job as an investigator with TCSO’s Criminal Investigation Division.

Olmo-Novoa said working multiple jobs takes a toll on them – and their families. He is a single parent of two sons – one of whom is Autistic.

“Eventually you get tired and cranky and you might bring that home … the divorce rate is high within the law enforcement profession,” he explained. “But these guys (deputies) are working their butts off. They’re trying to do what’s right but they’re living paycheck to paycheck.”

“We understand coming into law enforcement that we’re not going to be rich,” said Troup County Sheriff James Woodruff. “I remember working multiple jobs, sometimes two or three at the same time, when I was both a Sergeant and a Lieutenant just to make a living.”

All on the line

The average salary for a starting deputy in the state of Georgia is $29,900, according to the Georgia Sheriffs’ Association.

In Troup County, a starting salary for a new deputy is $28,246, said Woodruff.

Woodruff and members of the Georgia Sheriffs’ Association are disturbed by the low paying salaries. Deputies, like any other law enforcement agency, put their lives on the line every day. Yet, sheriff’s offices are some of the lowest paid departments in the state of Georgia.

The GSA, including Woodruff, wants better compensation for its employees. They may have found their solution in an amendment called the Other Local Option Sales Tax, or OLOST.

The measure allows consolidated governments, a unified jurisdiction of both city and county municipalities, to designate tax money (typically 1-cent) for funding law enforcement agencies and emergency personnel. The money can be used to increase wages, buy new equipment, send officers to training, among many other things.

While OLOST is a permanent tax, it is not enforced like SPLOST, meaning there is no permanent project or legally binding mechanism for it.

Before OLOST can even be considered by county governments, it must be approved by the Georgia General Assembly. Members of the Georgia Sheriffs’ Association are at the Capitol on a weekly basis lobbying legislators to support the proposal.

GSA is also asking legislators to make OLOST available to all jurisdictions – not just consolidated governments, the sheriff said.

“We (Woodruff and GSA) are first asking for a 1-cent sales tax hike in counties across the state – with the money to be used to increase deputies’ salaries,” Woodruff explained. “At the very least, we want legislators to approve a law, signed by the governor, that brings the OLOST amendment to the local ballots. Then, the citizens can decide whether to pass it or not.

“I believe with everything that has happened around here locally (criminally), that it (OLOST) would pass,” Woodruff added.

If passed, OLOST would mean a 1-cent tax increase for Troup County citizens.

If the measure fails, the only other option is for County Commissioners to increase property taxes so deputies can receive a substantial raise.

“No one wants to do that,” said Woodruff.

Without an increase in pay, the Troup County Sheriff’s Office will face another issue when it comes to recruiting new officers.

The competition to train potential officers with different agencies throughout Georgia became more cutthroat when an amendment signed by Gov. Nathan Deal took effect on Jan. 1. The legislation gave troopers and staff with the Georgia State Patrol, Department of Natural Resources and other state agencies a 20 percent increase in salary.

The starting salary for a Georgia State Patrol trooper – fresh out of the academy – is now $46,000, Woodruff said.

“The Georgia State Patrol and Department of Natural Resources deserve to make a good living too,” Woodruff stated. “… but I want to be able to offer a salary that attracts people to the sheriff’s office and keep them here … We (TCSO) attract great men and women to work here. But some work two or three years here and then leave to find another law enforcement agency with higher pay.

“It’s hard when you invest all that time and money into someone, and the person walks away from it,” Woodruff continued. “But I don’t harbor any hard feelings against them (TCSO employees). I wish them well because I know they are doing what’s best for their families.”

Ultimately, Woodruff and the Georgia Sheriffs’ Association would like legislators and Deal to also raise deputies’ salaries to $46,000 – making them competitive with GSP. But that proposal will be a hard sell for legislators living in counties with a small tax base, said Woodruff.

Still, the sheriff remains hopeful legislators and citizens will do the right thing – and allow some of Georgia’s unsung heroes to protect the community at a decent wage.

“I am confident that state legislators will vote ‘yes’ for OLOST … and we can keep good, qualified people here in Troup County to serve our citizens,” Woodruff stated.

“It will open up the doors to men and women who put their lives on the line every day,” added Johnson. “Those deputies will actually be able to spend quality time with their families. We’ve (deputies) have never done this job for the pay … we work odd shifts … the Sheriff’s Office never shuts down. Even when we’re home, we’re still on duty … but it would be nice to spend time with loved ones. We (deputies) just want to make a living to where we can see our families.

“We, as citizens, need to stand up and say, ‘We’re going to pay these men and women who are public servants a decent wage,’” Johnson added.

“It (OLOST) won’t just help out deputies, but their families too,” he stated.

Despite the financial hardships and juggling of jobs, Olmo-Novoa said, for now, he plans to stick it out. His passion for his job outweighs his struggle to make ends meet.

“I love my job,” he said. “I love the day-to-day interaction with people. There’s no other job that lets me do what I do here. We work for a great sheriff. Even if I had a chance to leave, I wouldn’t.”