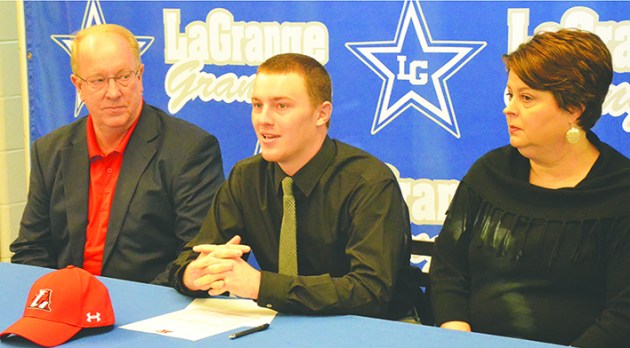 LAGRANGE – He won’t have to go far to chase his college dream.

Jordan Ragan, who has hit the home stretch of his time as a student at LaGrange High, is going to be playing football on the next level, and he’ll be doing it in a familiar setting.

Ragan, an outstanding offensive lineman for the Grangers, is going to be playing football at LaGarnge College, which means he’ll be spending a lot more time at Callaway Stadium.

Ragan made the announcement during a signing ceremony this week in the school’s media center.

Twelve other Grangers announced their college destinations last week, but Ragan was unable to participate in that ceremony because he was competing in the state wrestling meet in Macon.

“His work ethic was tremendous,” LaGrange High head coach Dialleo Burks said. “His leadership was through the roof. As a head coach, I want to thank you for being a role model for my little one, and others who are coming up, and also your teammates.”

Ragan will be playing for someone with close ties to LaGrange High.

Steve Pardue, the long-time LaGrange High coach who guided the Grangers to three state championships, is the new head coach at LaGrange College.

“I’m excited to play for coach Pardue, because I’ve heard so much about him,” Ragan said.

Burks, who was a senior in 1991 when Pardue arrived at LaGrange High as an assistant coach, said Ragan will be in good hands.

“You’re getting ready to go to another great program, and he’s a great man, and a great leader,” Burks said.

When Ragan was going through the recruiting process, he took a tour of the LaGrange College campus, and he liked what he saw.

“I just went over there, and I fell in love with the campus,” Ragan said. “I just liked the people there, too.”

Ragan was a multi-year starter at LaGrange, and he played for coaches that pushed him to be his best, and he feels that has helped prepare him for the challenge to come.

“I think it’ll help me play at the next level,” Ragan said. “I’ve played under tough conditions.”

Ragan also excelled on the wrestling mat, and he had a successful senior season.

Ragan made it to the state finals for the first time in his high-school career, meaning he was one of the best 16 wrestlers in the state in his weight class.

OF NOTE: For more photos from the signing ceremony, check out facebook.com/LDNSports