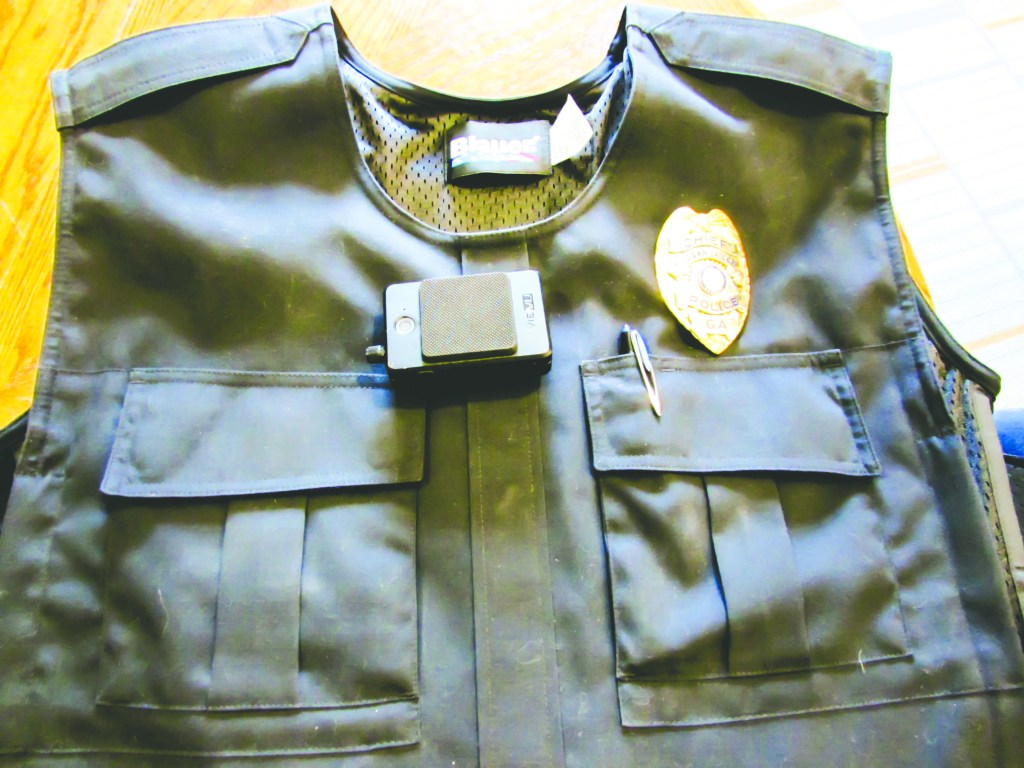 Hogansville – The Hogansville Police Department has been ahead of the curve when it comes to buying and deploying the use of body cameras on its officers.

The department first utilized the equipment in 2009 and upgraded their systems at least once since then, said Chief Brian Harr.

The chief, 12 patrol officers, a police sergeant, investigator, civilian animal control officer and six administrators within the department all wear body cameras on a daily basis.

“They provide officers with ability to gather evidence,” stated Harr. “We get a complete view of a call, the scene and interaction with officer. Even if there’s no video, at least there’s audio … the biggest thing is that it (camera) holds that trust with the officer and community. It’s also accountability for both parties.”

But some of the devices are malfunctioning and need replacing immediately.

“Our current body cameras are failing because of age,” explained Harr. “Sometimes it takes four to six weeks to send them off for repairs – and get them back.”

The average life span of a body camera is between two to four years, said Harr.

The Hogansville Police Department’s budget did not allocate any funding for the new equipment this fiscal year, the Chief said.

The department sought out a different source of revenue to purchase the cameras and storage by applying for a grant through the Community Oriented Policing Services, or COPS.

The group is a federal organization that falls under the United States Department of Justice.

The COPS grant is a 50/50 matching award that provides $20,000 to law enforcement agencies with 25 officers or less, explained Harr.

A total of 40 grants will be awarded, but the competition includes agencies from all over the nation, he added.

If the Hogansville Police Department is awarded the COPS grant, the money will be used to buy new body cameras and to store the video, in accordance with the state records law, said Harr.

The Chief said recent statistics show the body cameras are making a difference with the Hogansville community.

“Over the past three years, we (HPD) dropped our use of force and our complaints by 40 percent,” said Harr. “We also dropped our part one crimes (murder, rape, aggravated assault, robbery, burglary, theft, arson) for the second consecutive year.”

The department turned in their grant application on Thursday.

Now, the Chief and his staff will wait and see if the agency will be gifted with the extra funding.

Harr is hopeful COPS will recognize the department’s deployment of the cameras and utilization of the information it captures in the field.

“The body cameras and video allows me and administration to review calls for service, traffic stops and crime scenes,” he stated. “It’s a great training tool. We have a young department, so we go back and critique the officer’s video. The cameras also add a level of trust with our citizens and officers. We have the equipment and are using it to protect the community.”