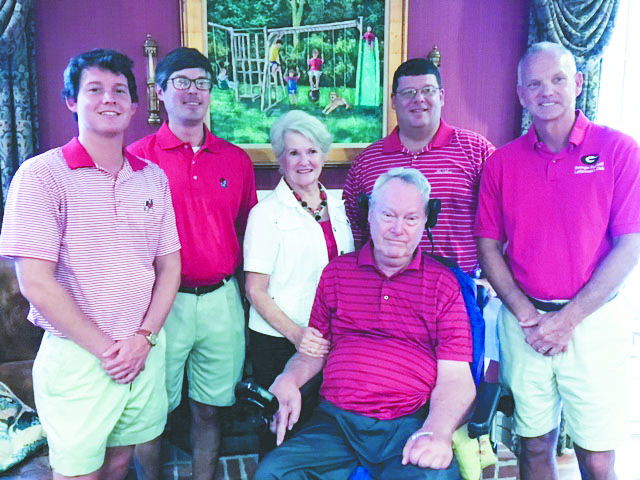 Steering committee members pose with Gail and Pat Hunnicutt, who are being honored by the establishment of a UGA scholarship in their names. From left are Sam Craig, Jake Jones, the Hunnicutts, Kyle Crawford and Jay Russell. Submitted photo

A scholarship has been established at the University of Georgia to honor a local couple and support future UGA students from Troup County.

The Gail and William Oliver (Dr. Pat) Hunnicutt III Scholarship was created by local UGA alumni to honor the Hunnicutts for distinguished leadership to the university and lifelong service to Troup County. Gifts to the scholarship fund will be matched by the Callaway Foundation for the next five years.

A steering committee, including Jay Russell, Heather Graham, Kyle Crawford, Bill Hunnicutt, Jake Jones and Sam Craig, plans to raise at least $500,000 in private donations for the scholarship fund by 2022. The Callaway Foundation has committed to matching each dollar given up to $500,000.  During the preliminary phase, nearly $150,000 has been raised in gifts and pledges.

The Hunnicutts have been active in the University of Georgia community for decades. Both Pat and Gail graduated from LaGrange High School and UGA. He played football for both schools, notably on Coach Vince Dooley’s first UGA team. She served on the UGA Foundation Board of Trustees and the UGA Costa Rica Board of Trustees.  Each of their siblings graduated from UGA, as did the couple’s two children and their spouses.

After graduating from dental school at Emory University, Dr. Pat Hunnicutt served his country in Vietnam. He then returned to LaGrange, where he practiced dentistry for almost four decades before retiring in 2008.

“Gail and I were surprised, honored and humbled when the local Bulldog group came to us to announce they had formed the committee to establish this scholarship in our name,” Pat Hunnicutt said. “We appreciate all we gained from our experiences at UGA, from the lasting friendships we formed and especially from the education we received and the opportunities that education afforded us. We are so honored to be associated with a scholarship that can help other Troup County students achieve those same opportunities.  How wonderful that the Callaway Foundation has agreed to match the donations.”

The endowed scholarship will provide support for an outstanding UGA student who is a resident of Troup County, and who graduated from an accredited high school in Troup County. First preference will be given to students with demonstrated financial need, as determined by the Office of Student Financial Aid at the University of Georgia.

Gail Hunnicutt said she saw firsthand the great need for financial aid for students during her 10 years as an active trustee of the UGA Foundation.

“The Hope Scholarship is wonderful financial support; however, a large gap remains between the total cost of attending UGA and support from the Hope grant. Pat and I are so pleased to be able to help insure that no deserving Troup County student is prevented from attending UGA due to financial constraints.”

University of Georgia leaders said the grant will expand the Hunnicutts’ legacy at their alma mater.

“UGA is committed to retaining the best and brightest Georgia residents through scholarship support and ensuring affordability for a college education,” said Jill Walton, executive director of corporate and foundation relations. “The Hunnicutt Scholarship will allow UGA to continue to attract outstanding students from Troup County and ensure that qualified students are not prevented from enrolling due to financial obstacles. This fundraising effort will further extend the legacy at UGA which the Hunnicutts have already established.”

For more information or to inquire about making a contribution to the scholarship, contact Jake Jones at 706-880 2215 or jakejones@combanktrust.com.