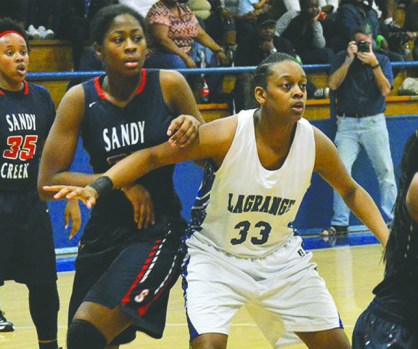 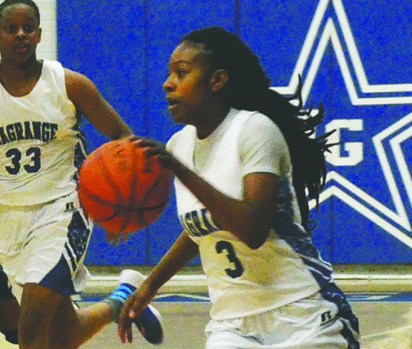 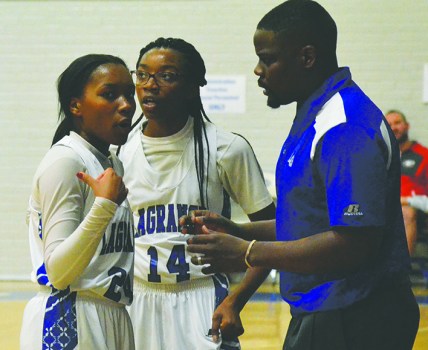 LAGRANGE – It was the worst possible start.

Facing Marist in the opening round of the Class AAAA state tournament last week, the LaGrange Lady Grangers found themselves behind 7-0 moments into the game, and they finished the first quarter with a paltry five points.

No one was worried, though.

The Lady Grangers have been overcoming obstacles all season, and a slow start wasn’t going to derail them.

The Lady Grangers, who were behind by seven after the first quarter, got within three by the half, and they ended up taking the lead late in the game on the way to a 46-43 victory.

Now, LaGrange faces another challenge, and it’s a big one, as it looks to keep its season alive.

Today in Augusta, LaGrange (18-11) will take on a Cross Creek team that is 24-4 and hasn’t lost since the middle of December.

It’s a team that features a 6-foot-2 post player in Alana Davis who has signed with Memphis, and she is surrounded by plenty of talented players.

It’s a monumental task for the Lady Grangers, but they’re not making the trip to the other side of the state just to get a participation ribbon.

“This is the thing we’re stressing now,” LaGrange coach Stephen Tuck said. “It’s not like the NBA where you have to win four out of seven games. We just have to be better than them on the one night.”

Finding a way to limit the effectiveness of Davis would go a long way toward helping LaGrange walk away with a win.

Not many teams have found a way to do that.

Davis averages 19 points and 12.5 rebounds per game, and she scored 24 points in a win over Americus-Sumter in the first round of the state tournament.

In the Region 3-AAAA championship game against Richmond Hill, Davis scored 34 points and had 14 rebounds.

LaGrange’s Shania Woodard, an outstanding senior post player in her own right, will be matched up against Davis.

“She’s really, really good,” said Woodard, one of three seniors on the team along with Demia Mitchell and Alle Strickland. “Basically, you’re just trying to keep her from scoring, and just play hard on offense and defense, play hard both ways.”

Tuck does believe his team matches up well at the guard position, with juniors Aryan Dozier and Chnaireia Strozier leading the way.

Dozier is an explosive player, and she is LaGrange’s leading scorer, and Strozier has also been a consistent scorer and she does a terrific job of handling the ball.

As LaGrange showed in the win over Marist, though, it can still win even when those three players aren’t putting up big numbers.

Seven different players scored, including Strozier and Dozier, who led the way with 12 and 11 points, respectively.

Tuck believes the Marist game provided a prime example of how much progress the team has made this season.

“At the beginning of the season, we would have fell to pieces, and everybody would have been doing their own thing,” Tuck said.

At one point during the season, LaGrange had dropped three straight games to fall below .500 in region play.

Since a 58-53 road loss to Chapel Hill, though, the Lady Grangers are 10-3, and all three of the losses were against Region 5-AAAA champion Sandy Creek.

“Everybody was playing their own game, and arguing,” Woodard said. “We came together as a team.”

Tuck said his message to the players at the beginning of the season was to understand that the best was yet to come.

Even now, with the season nearing the finish line, Tuck said the drive to improve hasn’t ended.

“Even versus Marist, I thought we got better in that game,” Tuck said. “We found some other players. We trusted each other more, because they had to.”

Tuck said the growth hasn’t been limited to the players.

With head coach Jan Fendley on paternity leave to begin the season, Tuck took over as head coach, and it was his first time running a program.

“I talk to them all the time about how much they’ve grown,” Tuck said. “And I’ve grown. Figuring how to handle end of the game situations, and lineups, it’s been a growing thing for me.”

Fendley returned part-way through the season and has been on the bench during games, and Tuck said he appreciates having her there.

If LaGrange is able to get by Cross Creek, it would play Henry County or Northwest Whitfield in the elite eight.