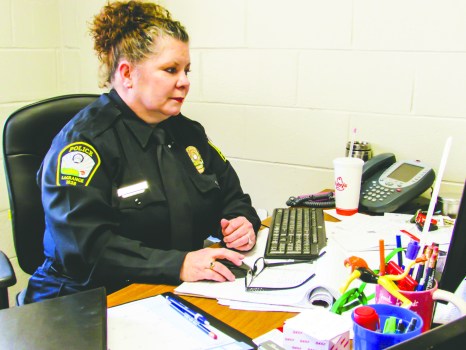 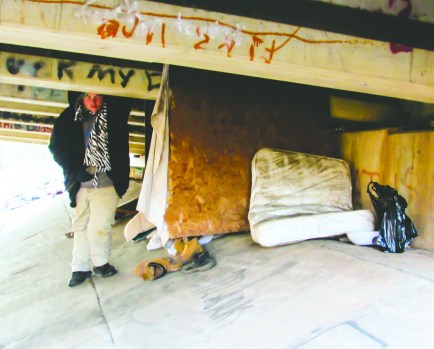 A homeless man hangs out underneath the bridge on Hogansville Road across from the Food Depot. Homelessness and people with mental health issues are the bulk of cases LPD Officer Natalie Blackstock is handling right now as the new social services worker. (Photo: File) 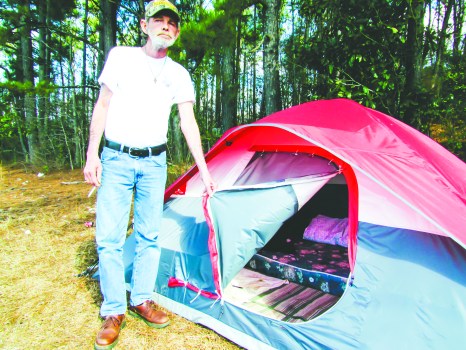 A homeless man shows off his tent, which was his home, located in the woods off Commerce Avenue. (Photo: File)

LaGRANGE – There is a well-kept secret among the men and women who work in law enforcement, including officers at the LaGrange Police Department.

Many times, the people asking for help have called 911 several times for the same issues, Dekmar added.

Those calls can tie up police resources that may be needed for more urgent matters in another part of town.

Last year, Dekmar and Capt. Mike Pheil, head of LPD’s patrol division, decided to use one of their own officers to work as a social services case worker. The job falls under the department’s Community Outreach Unit.

“… It is their job to solve long term issues as it relates to housing, employment, childcare issues, homelessness, substance abuse and more. Issues that we get repeated calls on,” stated Dekmar. “We want to help people become a productive part of the community and have less repeat (911) calls.”

Officer Natalie Blackstock, a 23-year veteran with the LaGrange Police Department, took over the position in July – and hit the ground running.

The majority of her cases deal with the issues of homelessness and mental illness, she said.

Blackstock had 29 active cases as of Monday. She works closely with officers in the patrol division and detectives in the criminal investigation section.

“When officers come across people in crisis in the field, like mental illness, they don’t usually have time to follow up on those cases,” she explained. “… I can dig deeper into the case and find those people resources to help them. We have a myriad of resources in the town.

“We had an elderly lady that was traumatized during the commission of a crime. The officers spent a lot of time with her. But I followed up with her… I called her to let her know what happened to the suspect and what was going to happen with case,” Blackstock continued. “The woman said she was grateful to receive my phone call.”

Phone calls, home visits and more will be the focus of Blackstock’s new position. She will help with the “disconnect” many victims may feel in between a crime and court proceedings, said Pheil.

“Years ago, when I was the criminal investigations commander, we would investigate reports of domestic violence … We’d investigate, get it into court three or four months later, but by that time the victims would infrequently cooperate with prosecutors,” he said. “There was this lag of time where no one would reach out to the victim … The police department may be called today to investigate a serious incident, but the court advocates don’t get involved until an arrest is made.

“Law enforcement as a whole saw (and continues to see) a large amount of cases dealing with people in mental crisis,” Pheil continued. “We could help them when they were breaking the law, but not their mental health issue. We would send them to jail because we’d have no other recourse … we (LPD) needed more community outreach.”

“We (law enforcement agencies) say, ‘We protect and serve.’ Most people don’t get into this job to make an arrest. They want to find out how they can serve,” she explained. “I get at least five cases a week from officers asking me to take a look at it, something’s not right … and that’s what we need. That’s why I got into this profession – to serve.”

More service programs around the region, like homeless shelters and public hospitals that help mentally ill patients, continue to lose funding and are forced to shut their doors. The loss of those resources leaves hundreds of people with nowhere to go – and a large void that seemingly is only being filled by law enforcement officers.

“The fact is by default it (social services) has become our duty,” Dekmar said. “Some people have chosen to ignore issues, like the mentally ill. So those folks live under bridges and eat out of garbage cans. Sometimes, mentally ill patients have a crisis. They will act out, act violent and the police end up taking their lives because there was no intervention. The fact is when social issues are not addressed, they then become law enforcement issues.”

Prior to Troup County establishing their mental health court, there were 25 people identified by the LaGrange Police Department that were responsible for 200 arrests, stated Chief Dekmar. Since then, the number of repeat offenders with mental health issues has dwindled down to three people.

Blackstock’s job is to be that conduit between people in need and resources around the community, like the Troup County Mental Health and Drug Courts or the LaGrange – Troup County Warming Center for the homeless.

“If that means we have to drive people to those services, then that’s what she’ll do,” Pheil said. “There are so many resources here, but victims either don’t know about it or can’t get there themselves.”

“… A lot of people that come through my office are dealing with mental health crisis. So I will look at the case and ask myself, ‘Does this person need to be charged? Or is there something else we can do to keep them out of the jail system,’” Blackstock added.

Blackstock, Pheil and  Dekmar believe the department’s new social services position will make a positive impact in the community and potentially reduce crime.

“… The success of this program will be measured by the individuals that are identified and if the services we hooked them up with met their need. A need that brought them into contact with police in the first place,” the Chief continued.

The LaGrange Police Department will review the data compiled by Blackstock in a year to determine if the social services position is effective and needed by the community, Dekmar added.