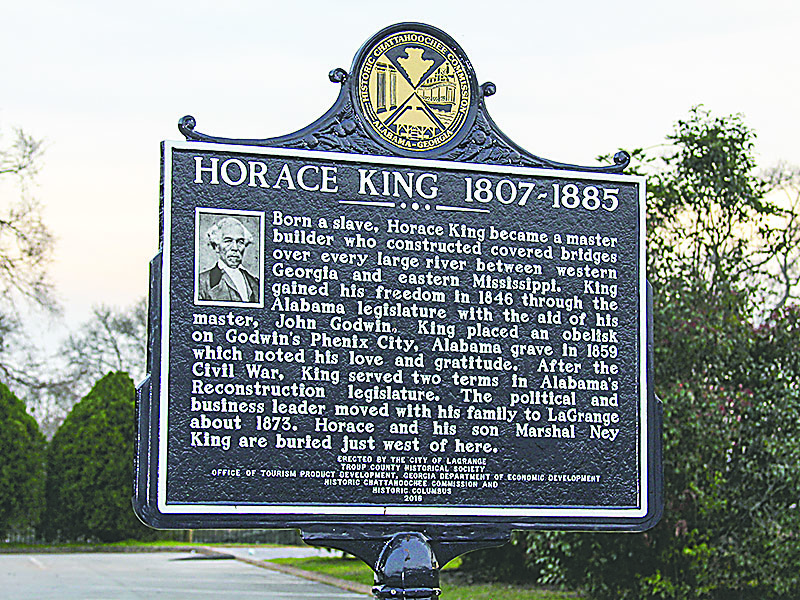 LaGRANGE – Another part of LaGrange’s past is now a bit easier to learn about thanks to new signs and grave markers at Mulberry Street Cemetery that point out one of the most prolific bridge builders of his day in the Southeast.

Horace King was a well-known and well respected bridge builder in West Georgia, Alabama and Northeast Mississippi for roughly half a century, beginning in the 1830s. He took part in the construction of town lattice truss bridges over nearly every major river from the Oconee in Georgia to the Tombigbee in Mississippi including nearly every crossing of the Chattahoochee River from Carroll County to Fort Gaines. The famed bridge builder started life as a slave and actually began his bridge building career while still a slave. He continued building bridges after he was freed in 1846 until his death.

King also served as a member of the Alabama House of Representatives for two terms during Reconstruction, but even then he continued designing bridges, textile mills, cotton warehouses and public buildings. King and his family moved to LaGrange in 1872, and he continued to construct bridges and other structures until his death in 1885.

“There is an obelisk that has been dedicated to Mr. (Horace) King and his son,” said Alton West, community development director for the city of LaGrange. “We’ve also had an historic marker placed down in that area, and a pavilion with some information for visitors that will come to the location.”

The new additions are part of a revitalization attempt by the city to better preserve the historic cemeteries that were renamed to reflect both the Confederate Cemetery and the plot where King and other individuals were buried.

“Last year we got a grant from the Georgia Department of Economic Development in the amount of $12,600 to do some renovations down on Mulberry Street Cemetery,” said West. “… (The city council) funded some grave finding through the Omega Mapping Service to find 400 some odd graves that were unmarked there, and they put out metal detectors to mark those for the future.”

King is also expected to be honored today when his portrait is hung in the Montgomery Capitol, with local historian Kaye Minchew representing the city.

The city hopes to have a dedication ceremony for the updated cemetery and markers on March 14 at 10 a.m.

Correction: The number of unmarked graves was corrected to reflect the actual number.