AKA sorority to celebrate 50th anniversary in March 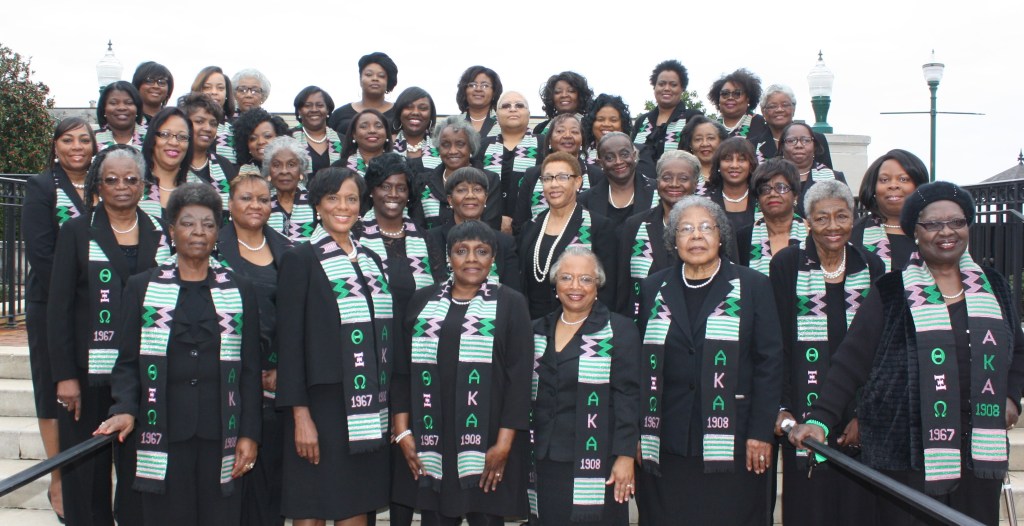 A picture of the current Theta Xi Omega Chapter of AKA Sorority in 2017. (Submitted)

LaGRANGE- Anytime something has lasted for 50 years, then it deserves to be recognized and celebrated.

The Theta Xi Omega Chapter of Alpha Kappa Alpha (AKA) Sorority, Incorporated in LaGrange will be celebrating its 50th Anniversary of Service and Sisterhood with a gala on Saturday, March 11 at 6 p.m. at the Callaway Conference Center.

On March 11, 1967, the Theta Xi Omega Chapter of Alpha Kappa Alpha Sorority was established in a charter ceremony at the Union Street Library in LaGrange and for the next 50 years the organization has done impactful work. Seventeen members were present at that ceremony and over the past five decades the chapter’s membership has spread to sorors of LaGrange and neighboring cities. The majority of members reside in counties like Coweta, Meriwether, Harris, and Troup, while some members live in the Atlanta area as well.

There are currently 56 chapter members that live in LaGrange. The sorority colors are green and pink.

“We are a service organization,” said Anita Williams, president of the AKA Sorority in LaGrange. “We service to all of mankind. We go out into the community and do community work.”

“Our service isn’t just limited to here in the community but we do outreach throughout the world,” said Lorraine Jackson, vice president of the AKA Sorority in LaGrange. “That’s why we have a target called global impact that our organization tries to reach internationally.”

“The five targets we women focus on in the chapter are educational enrichment, family strengthening, global impact, health promotions and environmental ownership,” said June Nelson, secretary and Target Chairman of Educational Enrichment of the AKA sorority.

The Theta Xi Omega Chapter is involved in multiple activities and projects and contributes in the community. Every year the ladies of the AKA Sorority have a boule — where African-American women of different professions get together at an educational convention. They have conferences. They give out scholarships annually to students of all four counties (Meriwether, Troup, Coweta, Harris) who are attending a HBCU (Historically Black Colleges and Universities).

When it comes to educating, Nelson says they work with a group of high school students (ninth through 12th grade) and they discuss topics like achievements, communication, networking, careers, financial planning, job applications, they get speakers in to talk about different careers, they take the students to a HBCU college football game every year, and allow them to attend a HBCU job expo.

Along with those activities, the sorority usually throws a Cotillion Ball yearly, which is a coming out party for young ladies when they reach a certain age. They support and raise funds for people dealing with Alzheimer’s disease in LaGrange, give awards to communities who have fit their five focus targets, participate in the Martin Luther King Jr. Parade that takes place on downtown LaGrange (which they have won first place for the last two years), and try to spread the wealth around all the counties in which they serve

What stands out with members is the sisterhood and comradery that these women develop between each other after all these years of working closely with one another, they said

“I enjoy the sisterhood,” said Karla Fagg, protocol chairman of AKA Sorority. “I enjoy the relationships with all these ladies. We love to work but we love to be around each other.”

“Nothing pleases me more than to be in a room with educated black women,” said Donna George, head of Family Strengthening Chain of AKA Sorority. “There’s nothing better than being with a group of people with like minds.”

“I get hyped for service,” said Nelson. “I’m always thinking in my mind what to do next or I can do this or I can do that. When something is in your heart you love it, and it’s in my heart what I do for Theta Xi Omega.”

“I love the friendship, the fellowship and the sisterhood,” said Williams. “Besides God and my family, they’re my next family.”

On March 4, Theta Xi Omega Chapter of AKA Sorority will host a prayer breakfast at 10 a.m. and that will lead into the sorority celebrating 50 years of service on March 11 at 6 p.m. taking place at the Callaway Conference Center.