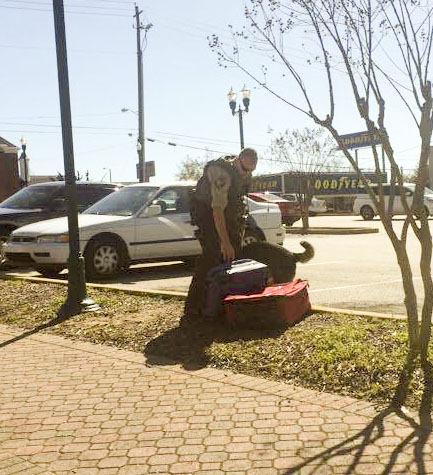 Troup County Sheriff's Deputy Matt Mayfield and his dog Jack use a suspicious package deemed to be safe as a quick training exercise in downtown LaGrange on Friday morning. The empty suitcases were collected as evidence by LaGrange police.

Luggage left unattended led to the shutdown of several blocks of downtown LaGrange on Friday morning as law enforcement investigated a suspicious package.

“We always take precautions,” said LPD Sgt. Rogelio Perez. “Someone was probably startled to see (unattended luggage) on the sidewalk and reported it.”

Beginning around 10:30 a.m. several streets of downtown were blocked, including Broome Street from South Lewis to Maine and Bull Street from Lafayette Square to Byron Hurst. The luggage had been left near a trash can at the edge of the parking lot at Broome and Bull streets, next to Lafayette Society of Performing Arts and Perez suspects that someone was attempting to throw it away.

Traffic was rerouted and people were told to stay inside downtown businesses while the investigation went on.

The Troup County Sheriff bomb dog and other deputies were brought in to investigate and quickly determined no danger was present. Downtown was blocked for about an hour.