‘Your capabilities are your Cape-Abilities’ 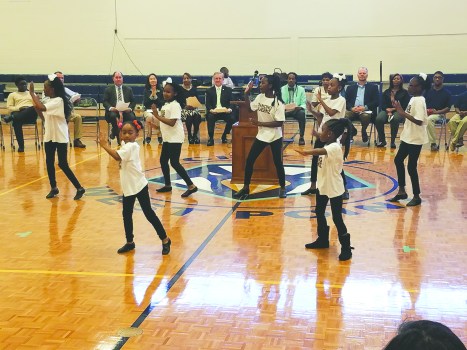 WEST POINT – West Point held its traditional Black History Program Thursday night at the Point University Gym to celebrate the importance of this month and acknowledge figures in the community doing superb work.

The theme of the Black History Program this year was “Your capabilities are your Cape-Abilities” and that title registered throughout the program.

A group of young girls called the Dancing Queenz performed a dance routine. A sister act was on presented when KaLisa Lynch performed the song “I Know I’ve Been Changed” while her little sister Jazmyne Lewis executed a dance routine while big sister sang.

The message was brought to the audience by Nigel Walker, the assistant principal at Callaway High School and he stressed to young students and adults listening to let to reach your capability in whatever your passionate about or have the skill in.

The theme “Your capabilities are your Cape-Abilties” comes from Walker making several references to superheroes like Spiderman and Superman. The “Cape” in “cape-abilites” represents the cape that superheroes where and the responsibilities they carry to utilize their ability to make society a better place and showcase the skill you’ve been blessed with.

“In order to do anything you have to be ready, focused and excited,” said Walker, speaking to the crowd. “Your attitude towards people will determine how far you will go. When they talk about capabilities and superpowers, your attitude determines your altitude. The higher you rise above situations, the better you can see your future.”

While talking to the crowd, Walker emphasized to students in attendance to not let weaknesses bring them down and get in the way of reaching their full capabilities.

“Having the power and ability to reach your goals should be your focus,” said Walker. “Your ability is in your capability. Your responsibility is to be motivated. Find the power that lies beneath you.”

Ricky Wolfe, the former Chairman of the Troup County Commission, addressed the issue of race to the public and how we as a community need to be more open about the discussion when it’s brought up.

“Living in the South, were very gracious people but when race is brought up we like to say, ‘You shouldn’t bring that up, someone’s feelings might get hurt’ but in reality they’ve already been hurt,” said Wolfe.

Wolfe is a part of the Trust Building and Racial Reconciliation committee in LaGrange, which is an organization that have around 25-30 people that meet together for a session on Fridays and Saturdays that focuses on building trust between the group and sharing personal stories of how they have encountered racism in their life.

“We try to create an environment where everyone’s welcomed,” said Wolfe. “We talk about the subject of race and how it impacts people’s lives. It’s not enough for us in 2017 to say ‘I’m not racist,’ we have to be anti-racist.”

Other high marks throughout the program included students from West Point Elementary School and the Innovation Station Early Learning Center being awarded certificates for their academic achievements and progress.

Longtime Educator in Troup County, Zelma Brock, was recognized for her 44 years in the education system and awarded with a plaque. Others such as Brandon Ashford, Eunjoo Kwak Wilcox, Richard Chapman, Tomekia Day, Nannette Jackson and Dodie Thompson were all awarded a plaque for the service and good work they have displayed in the community of West Point.