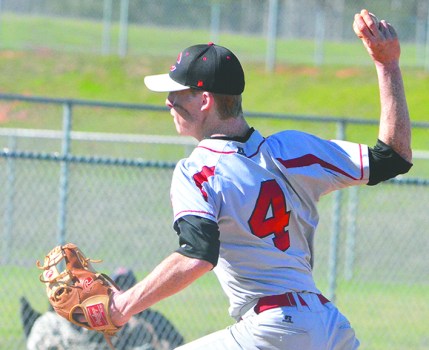 HAMILTON – After falling to Harris County in their first game on Saturday, the Callaway Cavaliers were looking for a bounce-back performance later in the day against Upson-Lee.

Things started out nicely, with the Cavaliers scoring a pair of runs across in the first inning, but it was the Knights producing five unanswered runs after that on the way to a 5-3 victory.

Callaway, which lost to Harris County 7-1, fell to 2-5 with its third straight loss.

In both games, the Cavaliers had some costly defensive miscues that led to big innings, and they struggled to find offensive success with men on base.

“At some point, you’ve got to say you’re not very good right now, and you’ve got to find a way to fix it,” Callaway head coach Dusty Hubbard said. “We’ll get another chance Monday, and we’ll try to go do it.”

Callaway still has seven more games before it begins its Region 5-AA schedule, so there is plenty of time to right the ship.

Callaway will be at home four times next week.

Callaway plays Hardaway today and Carver on Friday, and it will play defending state-champion Westminster twice on Saturday.

Against Upson-Lee, Callaway made things interesting late with a run in the seventh inning, and it had the tying run on base.

The Cavaliers had a base runner picked off for the second out, so the bases were empty and they were down to their final out.

Dylan Johnson kept hope alive with a walk, and Slone Raper followed with a base hit.

Ben Griffin then delivered an RBI single, and it was a 5-3 game, and the Cavaliers had two men on base.

A strikeout ended the inning and the game, though, as the Cavaliers fell short.

In the first inning, Drake Wade and Chandler Lott led off with back-to-back singles.

Raper later had an RBI single, and Griffin had a sacrifice fly as the Cavaliers took the early lead.

Upson-Lee scored three runs in the third inning, and two in the fourth to build a 5-1 lead.

Lott got the start for Callaway and pitched the first 3 2/3 innings, and Josh Hanson threw 2 1/3 innings of scoreless relief.

In the first game, Callaway scored its lone run in the third inning.

Wade walked and later scored, and Callaway had a 1-0 lead.

Harris County came right back with four runs in the bottom of third, and it completed the scoring with three runs in the fifth inning.