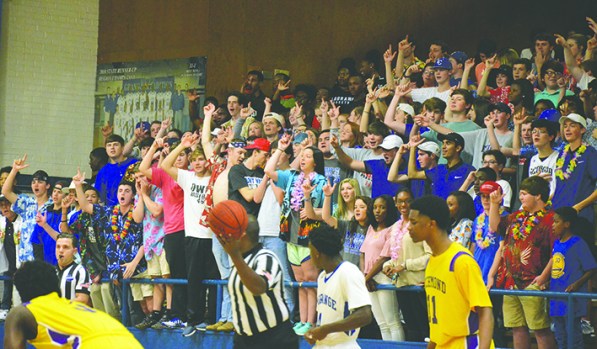 LAGRANGE – It was one of their most important wins of the season, and it didn’t take place on the basketball court.

After the LaGrange Grangers beat Richmond Academy on Thursday in the quarterfinals of the Class AAAA state tournament, they knew who their opponent would be in the elite eight.

What LaGrange’s players and coaches didn’t know was where the game against Henry County would be played.

Home-court advantage was going to be decided by a coin flip, and it was LaGrange coach Mark Veal making the right call on Friday afternoon.

For the players, winning the coin flip was another victory in a season that has been filled with them.

“I don’t have a word that can describe it,” said D.J. Cooley, one of the eight seniors on the roster. “We were real happy about it. It was meant to be. So we’re real pumped.”

The Grangers have only lost once on their home floor this season, and that came in late December when they fell to unbeaten Upson-Lee in the championship game of the LaGrange Toyota Basketball Classic.

LaGrange won the Region 5-AAAA championship on its home floor with a win over a talented Sandy Creek team, and it has beaten West Hall and Richmond Academy in the state tournament.

At nearly every home game, there is a boisterous, enthusiastic student section that provides a major lift for the home team.

The students have even come up with a nickname for LaGrange High’s gym, calling it “The Barn,” and it has been an inhospitable atmosphere for opposing teams.

“We didn’t even want to think about playing at Henry County,” senior guard Jarious Freeman said. “We wanted to play here so bad.”

This will be LaGrange’s final home game, with the state tournament moving to neutral locations for the semifinals and the championship games.

“It’s exciting,” said senior LaPerion Perry, who scored 32 points in the tournament win over Richmond Academy. “The people that didn’t get to come to our last game can come to this one. It’s our last home game. We’re ready.”

Having this sort of support is nothing new for the Grangers, and Veal said it is part of what makes basketball at LaGrange High so special.

“To have the crowd support and the student section we have, that’s why you enjoy playing basketball at LaGrange High School,” Veal said. “And it’s been that way for years. It’s just an incredible game-day atmosphere. And you don’t get that everywhere. So we’re really blessed to be at home again. They’ll all be behind us and supporting us.”

In last week’s game against an outstanding Richmond Academy team, it was close late, and LaGrange went on a run to put it away.

After back-to-back dunks by Bo Russell and Kenan Gray, the gym was shaking, and LaGrange turned a six-point game into a blowout.

“It means a lot, and we really need it,” Freeman said of the crowd support. “When we go on runs, it helps us sustain our energy. It really does help.”

It starts before the game begins, with the fans eagerly greeting each one of the players as they’re introduced, and the enthusiasm level never lets up.

“The crowd gets into it, it pumps everybody up, and gets us ready to go,” Perry said.

Gray, whose dunks and blocked shots help spur the crowd on even more, said “it means a lot” to have this level of support.

“We feed off the fans,” Gray said.

After Wednesday’s game, the fans will have to go on the road to support the Grangers.

The semifinals will be in Augusta on Saturday, and LaGrange would play either Upson-Lee or Thomson.

The championship game will be at Georgia Tech next week, and LaGrange could be staring at a rematch with Sandy Creek if it makes it that far.

OF NOTE: Check out Wednesday’s sports section for a preview and much more on the quarterfinal matchup with Henry County.