Director: Lots to do under LSPA umbrella 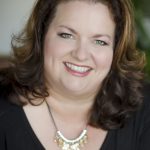 It’s a spring Friday morning at the Lafayette Society of Performing Arts and a visitor can tell it’s in the middle of the organization’s busy season.

A conference table sits in the lobby where members of the Azalea Storytelling Festival Committee just gathered to get ready for the even that kicks off that night. A giant inflatable swan, part of a promotion for “Swan Lake,” opening next weekend, sits high on a shelf nearby.

And Kerri Vice is in the middle of it all.

“It’s definitely a lot of work, but it’s a lot of fun,” she said.
Vice has been executive director of LSPA officially since Jan. 10, after being named interim editor in August. Before that, she served as the organization’s business manager.

“Everyone here is so talented, it amazes me every day,” she said. She likes to call this month “March Madness.” The storytelling festival is this weekend, Swan Lake is next weekend, along with a choral festival. Charlotte’s Web is coming up after that.

“That doesn’t even include the productions the schools put on,” she said. “I get the opportunity to enjoy it. My child can be part of anything she wants.”

Vice moved to LaGrange in 1994 to work for Milliken, and started her career as an engineer. She’s always been right- and left-brained though, she says and always enjoyed the arts. While at Milliken, she took on roles in human resources and marketing, which helped her prepare for running an organization like LSPA.

While the organization stays busy, there’s always creative people around to participate in activities. The LSPA float featured in the city’s first Mardi Gras parade was put together in just three days, between productions. It won an award.

“I never have to worry that we can’t do something,” she said.

The organization has about 400 students in its programs right now and Vice wants to expand that, along with getting more instructors and a wider variety of programs. A series of puppet workshops was held in February.

“It’s important for people to know this is here,” Vice said.