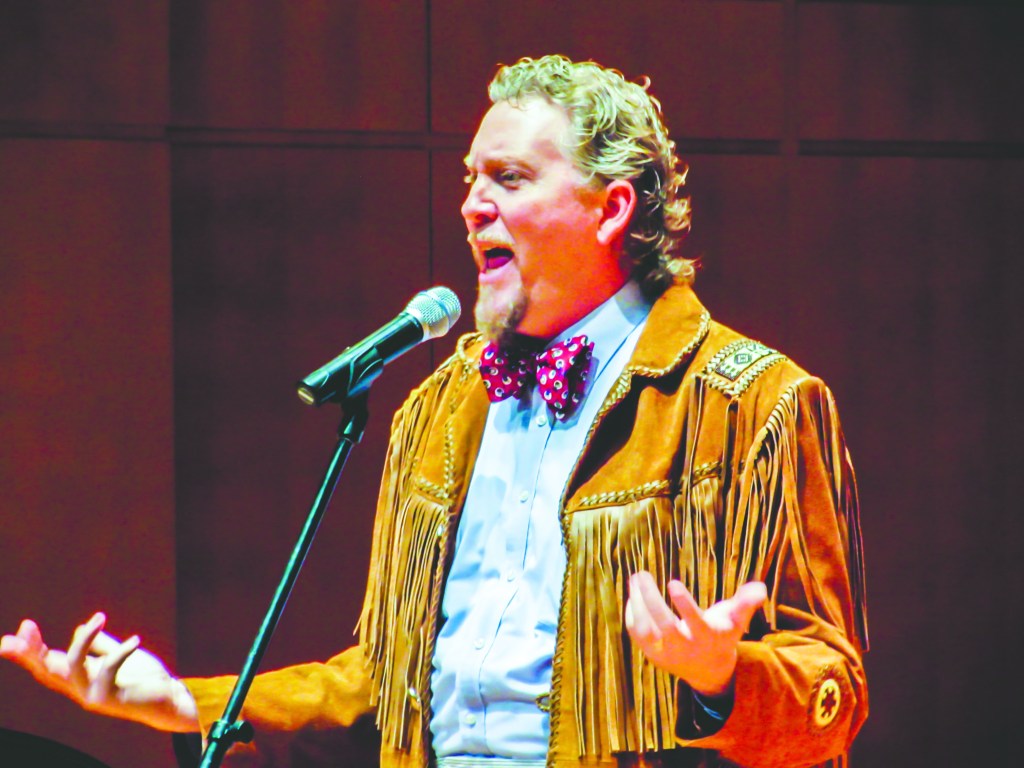 Professional storyteller Tim Lowry keeps the audience captivated on Saturday inside the Callaway Auditorium as he shares tales of his wild adventure driving across part of the United States countryside. This was Lowry’s first time performing in the annual Azalea Storytelling Festival. (Photo By Melanie Ruberti | Daily News)

LaGRANGE – Professional storyteller Tim Lowry charmed his way into the hearts of his audience on Saturday by bringing them a unique “gift” – a bag full of funeral fans.

The self-proclaimed “Ambassador of the Sweet Tea Trail” from Charleston, S.C., used his thick, southern drawl and quick wit to keep people laughing with delight as he told tales of his travels across the country.

From Lowry’s craving for authentic “cowboy” chili while in Utah (where he was instead handed a microwaved bowl of Hormel chili from a can) to his need to buy a genuine leather, fringed jacket from a “backwoods” Colorado museum; the narrator was a hit during his inaugural appearance at the 21st annual Azalea Storytelling Festival this weekend.

“I was thinking of a song by country singer Tom T. Hall called, ‘I Wish I Had a Million Friends.’ I think there are about 500 of them in here right now,” Lowry laughed as he gestured around the packed Callaway Auditorium. “… hearing other people’s life experiences is fascinating. You meet people everywhere … from all around the world.”

Lowry said his stories are, “… of the people, by the people and for the people.”

The genteel, yet zany, Southern gentleman was one of four storytellers who entertained audiences throughout the weekend at the popular LaGrange festival. Charlotte Blake Austin, Andy Offutt Irwin and Donald Davis returned to the stage this year in the Azalea Storytelling festival to once again enchant the crowds.

“Donald Davis has been in this festival 13 years out of the 21 years we’ve been hosting it,” said Joyce Morgan, co-chair of the Azalea Storytelling Festival. “Cheryl Austin was here in 2003 and Andy Irwin performed here in 2012. The festival is a wonderful mix of the best storytellers that we know and one bright, new rising star.”

The emcee for this year’s event was well-known local orator Carol Cain, of Hogansville.

The Azalea Storytelling Festival continues to grow in size each year and attracts patrons from all over the world. A lot of work goes into making sure the event goes off without a hitch each year.

“We enjoy it. The committee is already working on the festival for 2019,” said Linda Hart, co-chair of the Azalea Storytelling Festival. “I enjoy the storytelling, seeing returning guests and meeting new people. We’ve had people come from as far away as Hawaii and Australia to hear the storytellers.”

“We both strongly believe in the power of telling a story and the integrity of the festival,” Morgan added.

“If you’re striving to be a storyteller or even to create memories you should attend the workshops” said Joanna Baxter, an Azalea Storytelling Festival committee member. “Do it for your children and for your families. The event will enhance your skills.

“For Stories in the Garden, it’s held outdoors and I put down quilts for the children and families to sit on,” Baxter continued. “The events are all unique and allow more people to enjoy storytelling in different ways.”

The main festival plus the added events throughout the year is also focused on drawing the community together as a whole: young and old, rich or poor and people from all ethnicities and backgrounds, the committee stated.

“… We’re seeing a lot of young people, high school and college aged students, becoming involved in our events,” Baxter said. “More generations (of people) who want to learn the art of storytelling.”

Generations of people who are also learning to appreciate the art of storytelling made quite apparent as folks lined up after Lowry’s performance just so he could autograph their new funeral fans.

“Can you sign this for me and my grandmother?” one child asked him.

“I just appreciated your stories so much,” another woman told Lowry. “They were great. I appreciate you being here (festival) this year. I hope you come back.”

“I think I’m going to have to bring more funeral fans next time,” he joked as he looked at the empty bag. “Time will tell if they (festival committee) brings me back, but I would love to.”