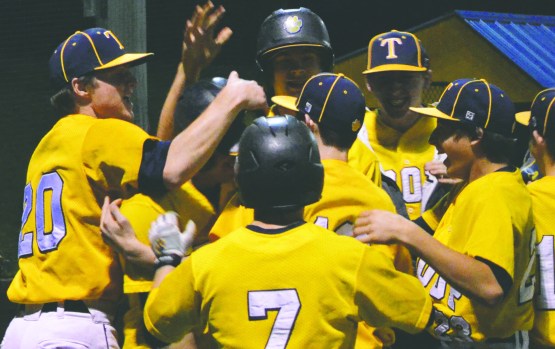 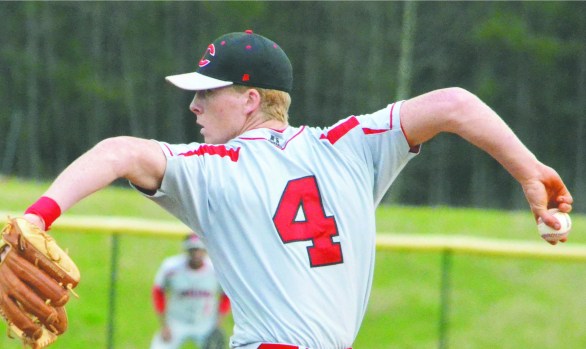 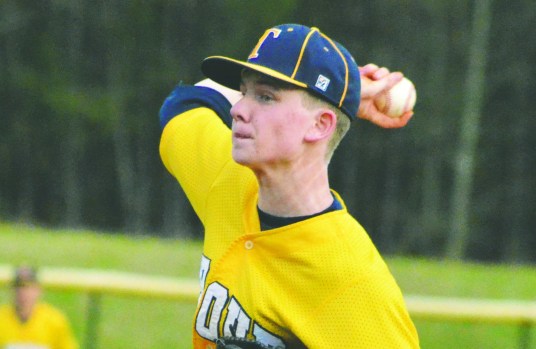 LAGRANGE – They found a way.

The Troup Tigers, who were held scoreless for the first nine innings of Monday’s cross-county showdown with the Callaway Cavaliers, pushed two runs across in the bottom of the 10th to pull off a 2-1 victory in a game that featured a pair of dominant pitching performances.

Troup scored the tying and winning runs in the 10th inning despite not getting a hit.

Neal Searels and Jarred Helton each reached on walks to begin the inning, and they both came around to score when the throw to first on a Camren Russell bunt attempt went awry.

The game lasted as long as it did because of the lock-down pitching of Troup’s Colby Williams and Callaway’s Chandler Lott, who combined for 16 2/3 scoreless innings.

“Their pitcher pitched a good game,” Williams said. “You’ve got to tip your hat to him. You’ve just got to find a way to win.”

After nine scoreless innings, the Cavaliers finally broke through.

With Josh Hanson on third in the top of the 10th, Wade stepped to the plate with a chance to put the first run on the board, and he made it happen.

Wade hit the ball on the ground to the left side of the infield, and he slid head-first into the bag for the single, and Hanson trotted home with the go-ahead run.

Troup pitcher Brantly Robinson got the final out on a strikeout, keeping it a one-run game.

Searels led off the bottom of the 10th with a walk, and he moved to second on a passed ball before Helton earned a free pass.

Russell, Troup’s senior outfielder, was called on to get a sacrifice bunt down, which was one of the things the team struggled with during the game.

“We had a critical base-running mistake, we had three failed (sacrifice bunts),” Troup coach Craig Garner said. “And that’s so untypical of us. That’s what puts you in that situation.”

With the game on the line, though, Russell was able to get the bunt down to the right side of the infield, and the throw went over the first baseman’s head.

With Callaway’s fielders chasing to track down the ball, Searels scored the tying run, and Helton came in right behind him with the winning run, and he was mobbed his teammates as the Tigers celebrated the 10-inning win.

While it was a big win for Troup (7-3), it was a tough loss for Callaway (5-7), which has had trouble closing out close games this season.

“The thing that’s frustrating, it’s kind of been a microcosm of our season,” Callaway coach Dusty Hubbard said. “We get a lead, and can’t hold it.”

For both teams, a bright spot was the performance of the starting pitchers.

Williams has been terrific every time he has taken the mound this season, although it has usually been someone else getting the win.

In Monday’s game, it was Robinson getting the victory after pitching the top of the 10th inning.

As long as the team prevails, Williams isn’t concerned with who gets the win.

“Every time I’ve been on the mound but once we’ve won,” Williams said. “That’s all that matters.”

Williams limited the Cavaliers to three hits during his eight innings, and he had three strikeouts.

In his final three innings, he retired nine of the 10 men he faced and didn’t allow a hit over that stretch.

“I didn’t have my best strikeout stuff tonight, so I had to pitch through it, pitch to the contact,” Williams said. “I rolled a lot of ground balls.”

With the defensive performing so well behind him, Williams said he was fine with the Cavaliers putting the ball in play.

“I felt comfortable throwing groundballs,” Williams said. “If they’re making errors, you feel like you’ve got to strike this guy out.”

For Callaway, Lott was exceptional.

The junior, who is in his first season at Callaway, worked around five hits and he had two strikeouts.

“I thought he pitched,” Hubbard said. “A couple of times, he’s been a thrower. Today, he really pitched. He spotted his fastball, didn’t try to overthrow. Colby’s a great pitcher. Both of those guys were just dealing.”

After Lott got the first two outs of the ninth inning, Wade entered the game and got a strikeout to send the game to the 10th inning.

While the story for most of the game was the excellence of the pitchers, both teams did have some scoring chances before the 10th inning.

In the second inning, Callaway’s Slone Raper singled and moved to second on a Campbell sacrifice bunt, but Williams ended that threat with back-to-back strikeouts.

In the bottom of the second, Williams walked and Bailey followed with a double, but Troup was unable to score, with Callaway left fielder Milton Turner throwing a runner out at third for a key out.

Helton walked and Russell singled to start the third inning, but Lott was able to get out of that jam with no runs scoring.

In the top of the fifth, it was Callaway threatening after Ben Griffin singled and Hanson walked, but Williams buckled down and got a strikeout and a groundout to keep the shutout going.

In the bottom of the eighth, Troup had a chance to win it.

With two outs, Kenly Bridwell reached on an infield single, and Robinson followed with a base hit to put men on first and third, but Lott got a fly-out to end the inning.

In the ninth, it was Callaway threatening to take the lead.

Dylan Johnson reached on a one-out walk, moved to second on a passed ball and made it to third on a Raper groundout.

Bliss, who has settled into his role as a late-inning pitcher, then walked Campbell to put men on first and third, but he got a fly-out to keep the score at 0-0.

Troup went down in down in order in the bottom of the ninth, setting up the 10th-inning fireworks.

In the top of the 10th, Hanson reached on a one-out walk, and he was on third when Wade delivered the go-ahead hit.

“Josh did a great job of reading two pitches in the dirt, and Drake did a good job of getting a hit,” Hubbard said.

Callaway’s lead was short-lived, though, with Troup’s bottom three hitters in the lineup finding a way to get it done.

Callaway and Troup will both continue their non-region schedules later this week.

Callaway visits Handley on Thursday, and it will face Manchester on March 13 before beginning its Region 5-AA schedule on March 14 against Temple.

“We’ve got a chance to be pretty good,” Hubbard said. “I hope we can get these next two and get to .500 before region.”

Troup will be at the LakePoint complex in Emerson for the Perfect Game Showdown.

OF NOTE: For more photos from Monday’s game, check out Facebook.com/LDNSports