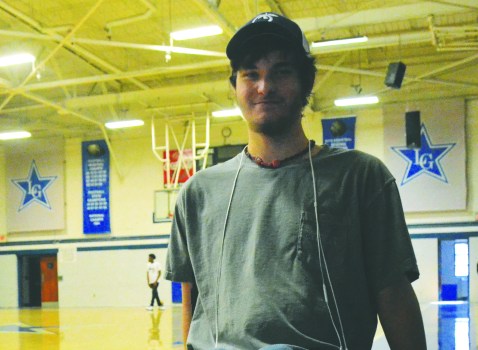 LAGRANGE – He’s hoping to return home with a championship.

Logan Wegienka, a freshman at LaGrange High, will be competing for a state championship today in Athens along with his teammates on the West Georgia Wolverines wheelchair basketball team.

The American Association of Adapted Sports Programs state-championship game will be held at 11 a.m. at Stegeman Coliseum, home of the University of Georgia basketball teams.

It will be the first of five championship games today, and the others will involve teams in the Georgia High School Association.

Wegienka is looking forward to not just playing for a title, but doing it on the Georgia campus since he is a big fan of the school’s sports teams.

The Wolverines won a semifinal game in Gwinnett County to earn the right to play for the state championship against Houston County.

“I’m really excited,” Wegienka said. “I’m excited for the championship, but I’m also excited that we’re going to the University of Georgia.”

Wegienka, who has been wheelchair bound for a decade after he was involved in a car accident that cost him the use of his legs, is a three-sport athlete with the Wolverines.

As soon as basketball season ends, he’ll turn his attention to football, and he’s also a part of the handball team.

Wegienka love sports, and he savors the competition, and he has never let the fact that he’s confined to a wheelchair slow him down.

Wegienka and his teammates get together at the Roosevelt Warm Springs Institute to practice, and they have competitions throughout the year.

Wegienka said it was two years after the accident that he got involved in wheelchair sports.

“I was in first grade when I first started,” he said. “My mom used to work at Berta Weathersbee, and I used to ride the bus over there, and I would ride home with her. My coach, I can’t remember why he was there, he saw us loading me into the car, and he walked over to my mom and talked to her a little bit and just asked if we could come by and see if we were interested. We went by, and I was hooked. The minute I started playing, I was hooked.”

Wegienka was relieved to find out he could still be active, just in a different way.

“I’ve always been kind of a competitive kid,” he said. “It was nice knowing that, even after the wreck, I could still have something to do.”

Wegienka said over the years he hasn’t spent much time playing the “why me” game.

The situation is what it is, and Wegienka has persevered, and he hasn’t looked back.

Wegienka also strives to help others in similar situations when he can.

“I’ve talked to a few kids that have been on my team,” he said. “One kid, he had similar stuff that he had to go through, and I talked to him and helped him out.”

As for today’s game, Wegienka said it will be all business when he and his teammates are on the court, and everyone will shake hands and exchange well-wishes when the competition is over.

“When you’re on the court you’re the worst of enemies,” he said. “But when you get off the court, you’re the best of friends.”