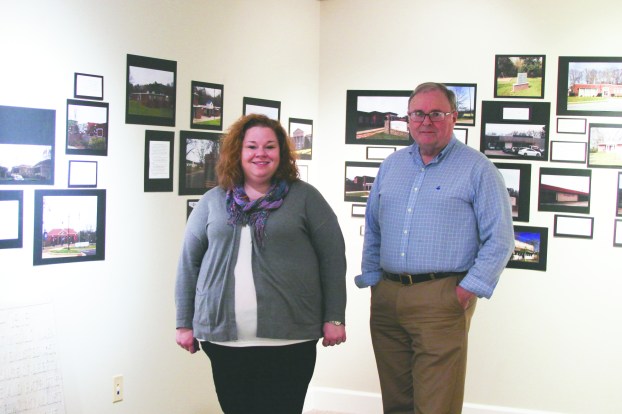 Executive Director Shannon Johnson and Historian and Curator Clark Johnson pause in the newly opened exhibit featuring local monuments from around Troup County. The exhibit is expected to remain open until fall. (Photo by Alicia B. Hill | LaGrange Daily News)

LaGRANGE – The Legacy Museum on Main kicked off its new Monuments and Memorials exhibition on Thursday, and while the opening night crowd was small, the museum staff more than made up for the excitement with their passion for the memorials around Troup County and the people who inspired them.

The named monuments in the exhibit range from the benches on LaFayette Square to the Ida Callaway Hudson Lab Sciences building that was named less than a month ago with a variety of buildings and monuments in between. But all the monument names aren’t as obvious as a name on a plaque, like in the case of the Sweetland Amphitheatre where the first concert of the year is scheduled to take place later this month.

“It was Boyd Park to begin with, named after Jim and Annette (Boyd), and of course they started the parade – the Sweet Land of Liberty Parade, and so the amphitheatre was named Sweetland as another nod to Mr. and Mrs. Boyd to remember them for their efforts with the parade,” said Executive Director Shannon Johnson.

The goal of the exhibit is to remember and honor the people who have worked hard and made a difference in the community, and the museum staff is excited to get to talk to people about these significant figures from Troup County’s history.

“I am looking forward to people getting more excited about history and learning a bit about Troup County,” said Katie Still, who works at the museum.

The museum is also featuring a special exhibit on women from before 1900 who held a special significance in Troup County in honor of Women’s History month. The women in the exhibit held a variety of jobs ranging from authors to mill investors to a Confederate spy.

“Everybody wants to be remembered, especially for their contributions, and if you don’t bring it to people’s attention every now and then, it is like they never lived, and they may as well of not done what they did,” said Troup County Historian and Curator Clark Johnson. “For instance, it was four women who kept LaGrange Female College running in 1868. The trustees decided to close it. Four local women kept it open, otherwise we wouldn’t even have a LaGrange College today.”

Besides keeping the college open, local women have also encouraged industry over the years, like the women who invested in what would later become known as the Calumet Mill.

“The ladies who all contributed to do the mill, I think is one of the neatest to me,” said Shannon Johnson. “There were 25 investors of that first mill… who were women. I just think that it is really neat that they took a part in that.”

This is the second year that the museum has featured an exhibit in honor of women’s history month, and while the women whose accomplishments are shown hardly represent every significant woman over the history of the county, they do provide a clearer vision of what women have done for the county over the years.

“It is just a sampling of the remarkable women who I like to say were ahead of their time,” said Clark Johnson.

The Legacy Museum is located at 136 Main St. and is open from 9 a.m. to 5 p.m. Monday through Friday and 10 a.m. to 4 p.m. on the first and third Saturdays of the month. Admission is free, but donations are accepted.

Reach Alicia B. Hill at alicia.hill@lagrangenews.com