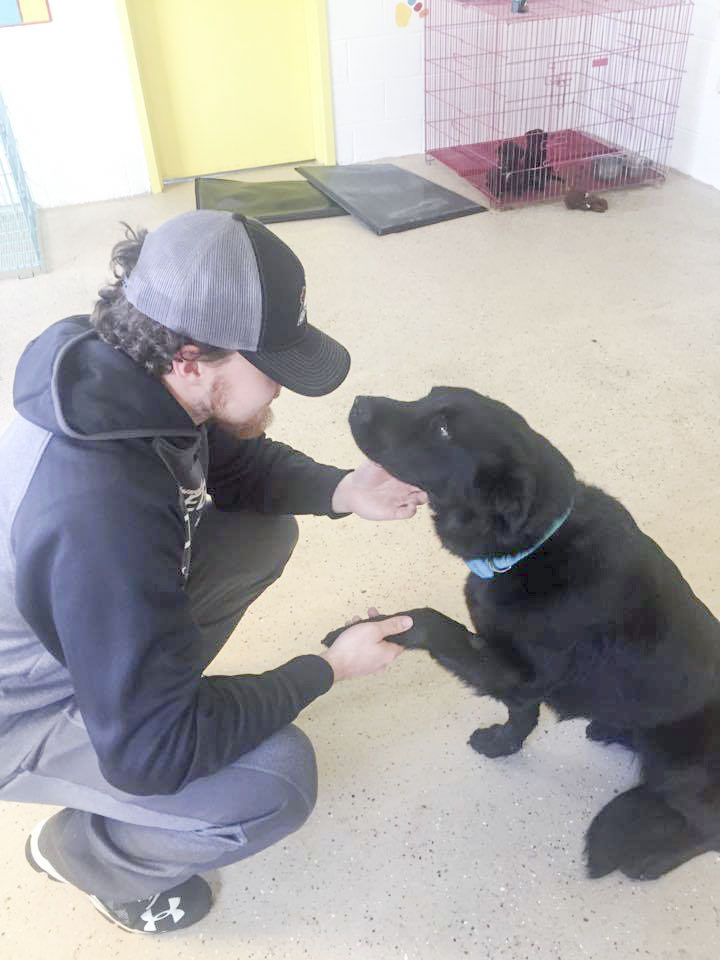 LaGrange College junior Chandler Joyner practices ‘paw’ with Luna, a dog at the LaGrange-Troup County Humane Society. Joyner, in the servant scholar program, has taken Luna on as a special project to help socialize her before she’s adopted. Photo by Jennifer Shrader | Daily News

Down on his knees, Chandler Joyner gives the basic commands to Luna, a one-year-old border collie-labrador retriever mix at the Lagrange-Troup County Humane Society.

Luna aces sit and stay, then she has a surprise for her human. She reaches out her paw to shake hands.

“Tammy (Weisert, another trainer) is either really good or Luna has been holding out on us,” Joyner jokes with Linda Couto, humane society manager.

In the meantime, Couto had just learned about a program popular in prisons where prisoners help socialize and train dogs to get ready for adoption. Joyner and Luna are the test case and more dogs could be paired with more dogs in the future.

Joyner comes in every day he can to work with Luna on basic commands and takes her out in the community to her vet and grooming appointments, and on humane society-sponsored trips to schools.

Luna, who was found as a stray, has responded well to having her own personal buddy.

“Mostly I just want to show love and compassion to her,” Joyner said.

Joyner and his parents, who live in Smyrna, have “right of first refusal” when Luna is ready to be adopted, but another potential owner is also interested in the dog.

“Either way she’s going to have a great home,” Couto said.