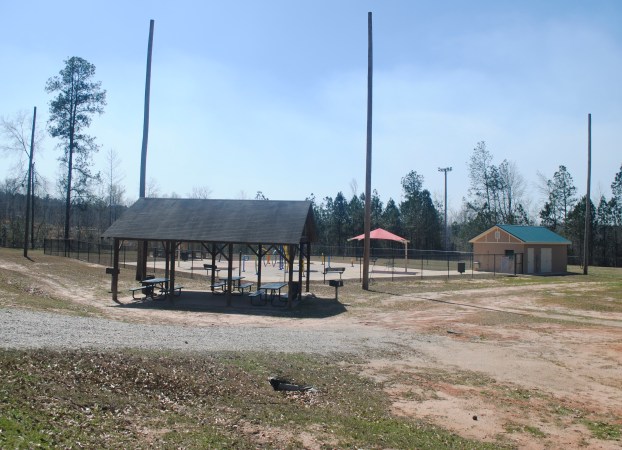 Adjustments looking to be made at Strozier Park

HOGANSVILLE- Big changes are on the verge of happening at Strozier Park in Hogansville.

Some local residents have been concerned about the state of the park, saying it was deteriorating and needs to be revamped. The issues center around a lack of lighting around the playground, lights needing to be installed under the pavilion (especially for night time purposes), the parking lot needing to be paved while adding designating parking, security cameras being inserted around the park for safety purposes, and the walkway around the playground fading out.

Only one of five poles have lights over the water park (called “Splash Pad” by many), but officials say more lights are coming.

“Wires are actually coming out of the ground for the other four lights,” said City Manager James Woods. “The poles that don’t have lights are already wired to have lights on them, with the exception of one. That one pole that has a light is going to be pulled up and moved to the other end of the long pavilion back by the playground. There will be one light furthest to the south, one light furthest to the north at the end of the pavilion, and the two that are in the middle there will be two lights on each pole facing each way.”

Woods says the one pole with light was the original light that was there when the park used to be a baseball park.

Woods expects the new lights to be added in the next four weeks or less.

“We have police officers who patrol our parks,” said Woods. “If we had cameras, they would have to be sitting in the office somewhere and the officers would have to get in their cars to get to the park. We’re very proactive. Our officers are out there patrolling the park and checking on it.”

Woods did add that adding new lights at the park will give “us additional benefit to be able to see what’s going on out there better,” but downplayed talk that security cameras need to be added.

“I think cameras have a purpose for some places but as a manager, I’m cautious as to how many cameras we put out because each one of those cameras intrudes in our public policy. How comfortable are you going to be feeling if the park you go to is jam-filled with cameras watching your every move? You’re supposed to be having fun.”

“Now if we had a large amount of crime over there, putting up a camera on a temporary basis to try to catch who’s doing it might be a tool we might use but I’d rather not be sticking up cameras on every street pole or at every park pole. If our officers are doing their jobs, we shouldn’t need any cameras. I think we’ll doing a great job. We have a community-based police department that is in tune with our community.”

When it comes to improving the overall beauty, quality and use of Strozier Park, Rhodes says that the Parks and Recreation Department is aware of the problems and changes are looking to be made in the future.

“It’s something that we have already identified and that is a potential, future SPLOST project that we call ‘SPLOST-5’ right now,” said Rhodes. “Some of the projects we have identified was updating the park signage, asphalting and making designating parking, and fixing the exit ways and entrance ways as well. So, those are what we identify with as a future SPLOST project.”

SPLOST is the special-purpose, local-option sales tax that is on the ballot in November.

There are two pavilions at the park and Rhodes is aiming to upgrade the picnic tables under both pavilions. One pavilion has a wooden top and concrete where the tables are mounted on, while the other pavilion has a metal top with no concrete below the picnic tables. Rhodes is planning to add concrete on the entire bottom side of the table under the metal pavilion, where they would mount the tables to the concrete.

“Along with upgrading the picnic tables, we are going to get more tables and chairs for parents to enhance the experience,” said Rhodes. “We want to increase seating ability, whether it’s plastic chairs or lawn chairs so mom and dad can have a place to sit and relax in the sun when their child is playing.”

While both pavilions currently don’t have any power, Rhodes says that “is definitely something we can look into adding.”

Three future SPLOST projects mentioned were the parking lot being paved, so people will have designating parking, a walkway being created that leads right into the park when people first arrive and the walking trail around the playground being improved.

“Once we get pave parking, people will know where exactly to park,” said Rhodes. “For the walking trail we were looking at a product you can lay down that creates a walking trail where you can walk or ride a bicycle on.”

Rhodes also said he will like to see a fence protector placed on the fence that surrounds the water park for safety reasons, along with making the fence the color of the water park (red, blue, or yellow) to enhance it and make it stand out.

“Many of these projects are future projects and you have to have funding to get it done, so we try to identify some of these needs in our operations budget,” said Rhodes. “A lot of these big products are future SPLOST projects, so hopefully we can get a good package together and get it out to the public, so they can make their own decisions.”