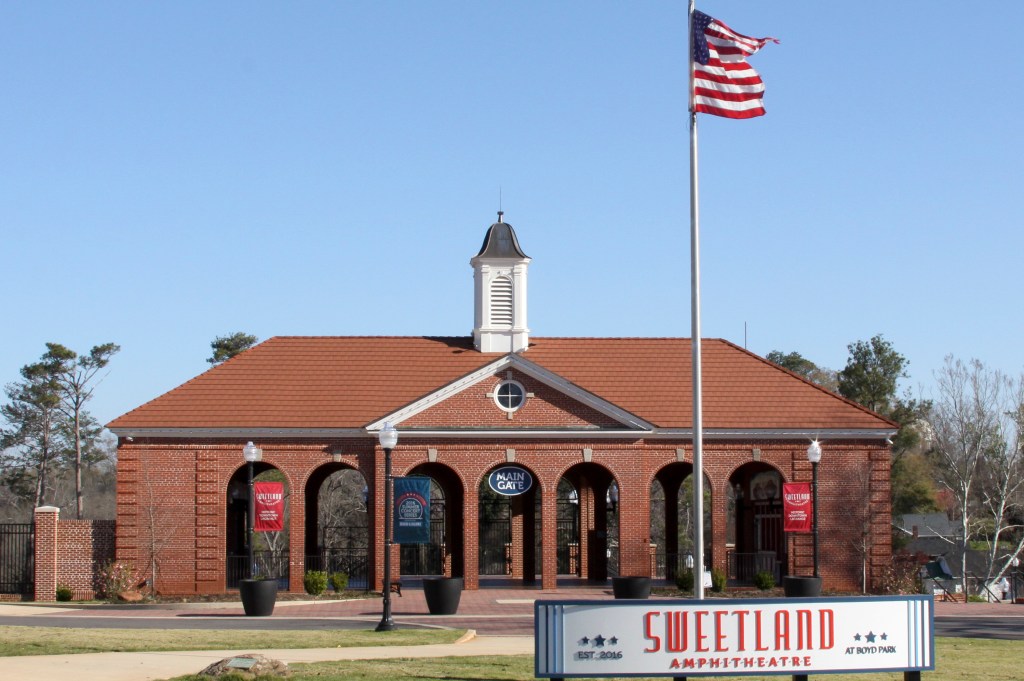 LaGrange’s downtown development authority presented this year’s plans for Sweetland Amphitheatre to the City Council on Tuesday and reviewed how the venue - which is about to enter its second concert season - did last year. (Photo by Alicia B. Hill | LaGrange Daily News)

LaGRANGE – Rock, country and jazz, oh my! As Sweetland Amphitheatre gears up for this year’s summer concert series, the venue’s organizers visited LaGrange City Council on Tuesday to update the council on this year’s lineup, as well as changes that will affect the city-owned venue.

This year will be Sweetland Amphitheatre’s second year of operation, and the amphitheater’s small team hopes to learn and grow from last year’s successful season and to have an even stronger year this year.

“I think it was about a year ago that we came here (to city council) and spoke with y’all, and I think that time when we were not only trying to get a venue up and running, but we were also trying to host a summer concert series,” said Sweetland Amphitheatre Director Becca Eiland. “So, we are much better poised this year then we were last year because we just have to put on a summer concert series and events throughout the summer.”

The venue organizers have attempted to select a good range of bands pricewise to make sure that even if locals could not see some of the bigger bands with more expensive ticket prices, there would still be some more affordable shows available in the summer line up. This year the amphitheater is set to feature The Beach Boys, Kool & The Gang, Vince Gill, The Molly Ringwalds, and – just announced this week – TajMo: The Taj Mahal & Keb’ Mo’ Band.

“About this time last year, we were kind of anxious about the concert season,” said Bobby Carmichael, of the Downtown Development Authority. “I will tell you that we went through the season, and I think we were all very pleased – none of us knew anything about running an amphitheater. I didn’t even know who some of the bands were that we were having, but we learned a lot in that first year, and thanks to the good security and hard work of the volunteers and people in our office, I would say that everything went as smooth as it could. We had no incidents. A couple of people got overheated during the summer months, but all in all, I would say it was a great concert season, and we are looking forward to another season coming up.”

Besides the summer concert series, the amphitheater is also set to feature Jason Isbell on March 31 and Blackberry Smoke on April 28 in shows separate from the concert series.

“We decided that in addition to that summer concert series to do two non-series shows that maybe that talent is a little outside of what that commonality with that series would be,” said Eiland. “…They (the ticket buyers) come from as far as South Carolina, Texas, Atlanta. I mean they are from all over, so these shows are really attracting people from outside this area that often times have never been to LaGrange, so we are excited to have them there.”

The amphitheater is also looking into having a concert featuring a nationally recognized soul, gospel singer in August, but they could not reveal who at this time because talks are ongoing. However, organizers do hope to make an announcement sometime in the next month.

“When we look at the diversity of our lineup, it is important for us to touch upon all of those different kind of interests,” said Eiland. “We realized that that (gospel/soul) is one that we really want to hit home on, and we think that will be tremendously successful.”

The venue’s organizers are also making a point of raising awareness about the amphitheater and its events, with an emphasis on local hotels. The downtown development authority has expressed hopes that the Courtyard by Marriott in downtown will receive a lot of business from concert goers once it opens – with the projected opening date for the hotel remaining in October – and with its location near the amphitheater, it will encourage visitors to stay and shop in downtown.

“We (on the council) are glad to hear that people are actually coming here from out of town and coming to the facility and staying in the hotels because – as the council may recall – through the chamber we authorized some of the tourism money that the city council designates for the chamber’s marketing purposes to come to support Sweetland, and that money is generated by hotel/motel tax, so if you are going to have that as a continuing source of income, you have to have those people from out of town coming here,” said Mayor Jim Thornton. “Certainly with the downtown hotel, I think that will make it even more likely to generate some traffic and some interest, but we also recognize that we were elected by the 31,000 residents of LaGrange and so we want to make sure that there are things that appeal to them.”

The Sunsets at Sweetland series which features free music and movies is expected to make a comeback this year with events on June 2, June 30 and August 4. Other community group events are also expected to take place at the amphitheater including the Delta Sigma Theta Sorority’s Bow Ties & Pearls event on May 6 to benefit the sorority and LaGrange College’s homecoming concert in October.

The city council encouraged organizers to look into more festivals in the future – like a jazz festival or a film festival – but they were sensitive to the fact that the amphitheater is only in its second year of operation, and its small team is still learning and growing into their roles in running the large venue.

To learn more about this year’s schedule of events at Sweetland, visit www.sweetland.events

Anyone with suggestions for the amphitheater or who might know someone who would like to perform at the venue is encouraged to contact Eiland at beccae@downtownlagrange.com