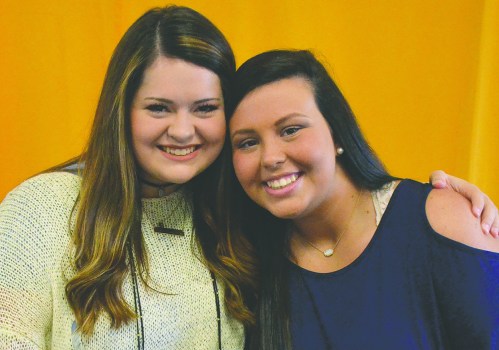 LAGRANGE – For the past few years, Maggie Johnson and Carsyn Cone have been a part of the Troup High cheerleading family.

During that time, they’ve not only helped the competition cheerleading team enjoy tremendous success, but they’ve become close friends.

So Wednesday was a special day for Johnson and Cone for a couple of reasons.

First and foremost, the two seniors signed their letters of intent to join the cheerleading team at Point University, meaning they’ll both get to continue participating in a sport that means so much to them.

Also, they’ll be doing it together, which means a great deal to each of them.

“It makes me feel like I have a piece of home there,” Cone said. “I’m really glad she’s coming with me. We’ve been good friends forever, and it really makes me happy that she’s cheering with me.”

The two will not just be teammates, but they’ll be sharing a dorm room as well.

“That’s the nice thing about it,” Johnson said. “I get to be there with her, and be roommates with her.”

Johnson and Cone helped Troup’s program achieve some great things over the past few years.

Most notably, Troup has accumulated back-to-back top-10 finishes in the state finals in Columbus.

Last season, Troup delivered a memorable performance in the state finals and finished fourth in Class AAAA, and that was a fine way for Johnson, Cone and the other three seniors to exit the high-school stage.

As for Johnson and Cone, Key said “I’m excited for them, and proud for them. They’re both incredible young ladies.”

During Wednesday’s signing ceremony, those closest to Johnson and Cone were on hand to share the moment with them, including teammates, friends, family members and coaches.

“It really just makes you feel so blessed,” Cone said. “I have so many people here watching me. I have a really strong love for cheerleading. I’ve been cheerleading all my life. And to be able to continue for a couple more years makes me really happy.”

One of Johnson’s biggest supporters over the years has been her mother Melody, but sadly she passed away earlier this year.

Johnson said her mother was very much in her thoughts during Wednesday’s ceremony.

“Ever since my mom passed, I just want to make her proud,” Johnson said. “So I’ve been praying about it, and I feel God blessed me with this opportunity.”

Johnson and Cone both stressed how much cheerleading means to them, and how grateful they are for this chance.

“I never dreamed I’d cheer in college, but I always had a passion for cheerleading,” Johnson said. “And when this opportunity came up, I was just blessed.”

Cone said she felt Point University was the place for her after touring the West Point campus and meeting with coach Lara Beth Griffin.

“Coach Key talked to coach Griffin, and I visited the school, and I just loved it,” Cone said. “And I really want to cheer.”

While excited for what the future holds, Cone said she will always treasure her time at Troup.

“I love to cheer, and I love being a part of Troup High School,” Cone said. “Once a Tiger, always a Tiger. I just love it.”

OF NOTE: For more photos from Wednesday’s signing ceremony, check out Facebook.com/LDNSports