Action to be taken on historical Elm Street Bridge 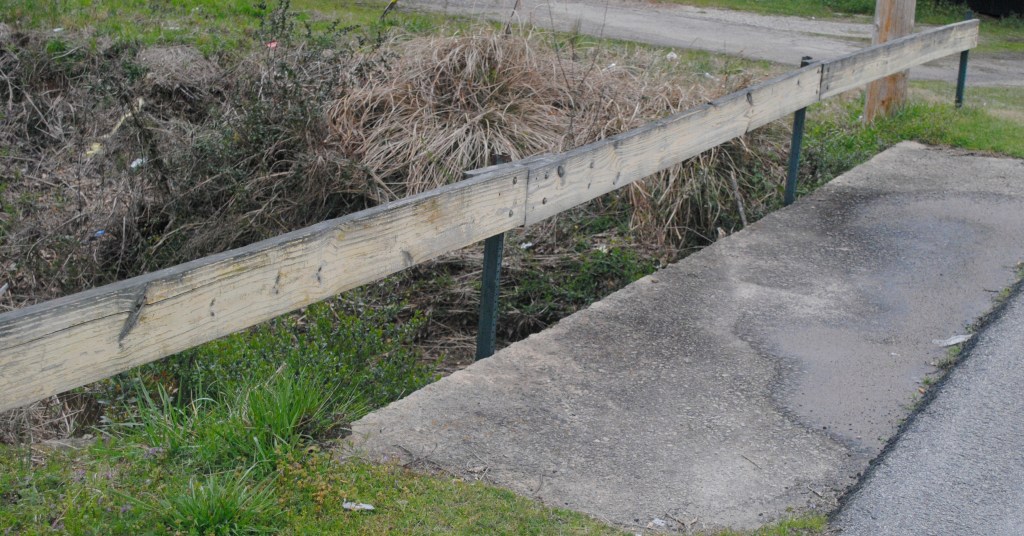 Some local residents have been concerned that the wooden guardrail on Elm Street Bridge is unstable and not safe. (James Simpson II | LaGrange Daily News)

HOGANSVILLE- Hogansville residents have been concerned recently about how stable and sturdy the two guardrails are on Elm Street Bridge.

There are currently two guardrails on Elm Street Bridge: one is completely wooden and the other is half wood and half steel. The uneasiness is over concerns the guardrails are not strong enough to hold humans or vehicles if they happen to fall over or get too close to the edge of the bridge.

“We are addressing the issue,” said City Manager James Woods. “When the winter storm hit, we had some damage to that bridge, not so much that we had to close the bridge up, but as soon as my engineers can get me the bid documents we are going to bid that out. What’s made this project take so long is that it’s not just a bridge, it’s a historic bridge.”

Elm Street Bridge was built in 1939 and Franklin D. Roosevelt, the 32nd U.S. president, had a hand in the project being developed. Originally, the bridge didn’t have any guardrails on it and the deck of the bridge was constructed as concrete and railroad ties.

“The project is that they will pick that deck up while they fix the headwalls that are deteriorating and re-run the piping that goes through the bridge headwalls,” said Woods. “Once the headwalls are built, then they will set the bridge back and install modern guardrails. We will still have an historic bridge but with modern abutments and guardrails.”

Woods said it took 12 weeks to get new guardrails approved because it’s a historic bridge and precaution was taken. The city of Hogansville did propose some things regarding the bridge but the federal government and state Historic Agency had to sign off on everything first.

“Most projects like this have to be signed off by various state and federal agencies before we’ll able to move forward,” said Woods. “The federal and state government are paying 12.5 percent for the Elm Street project. The total cost will be around $124,000, with the SPLOST money being used to match that. So as soon as I get the bid paperwork from the engineers, we will bid it out and then the general construction window for this project will be 180 days.”

Local residents also would like to see something done with the city’s dilapidated houses around the city’s west side.

However, Woods said there is a process before anything gets tore down or moved.

“There is a due process we have to go through in order to get to a point where we can tear a house down. Everybody says, ‘Oh, why don’t you tear that house down?’ but what they don’t know is that somebody owns that property. Somebody’s responsible for that property,” he said.

“I would have to do one of two things: Get the property owners to clean up their house themselves or if they don’t owe any money on it, donate it to the city and let the city clean it up. If I can’t get them to do one of those two things, then there are court procedures I could go through to face the issue of them cleaning their property. If they don’t clean it up, I can tear it down and put a lien on the property. There’s a lot of work that has to be done before we can move in and tear a house down.”

Woods says that the majority of the same dilapidated houses have been in that condition for 60 years but only now “does the city have the knowledge and understanding and the ability politically to start moving to tear those houses down.”

Woods also mentioned similar projects that involved tearing down old, rundown houses within Hogansville that included a house on Oak Street, Pine Street, Home Street, Popular Street, and the city is in the process of tearing down a house on the corner of Brooks Road and Ware Street and are looking into applying action to a house on Maple Drive.

“We are actively working but there is a legal process that goes along with each action where we just can’t tear any house down,” said Woods.

‘A Call to Rememberance’