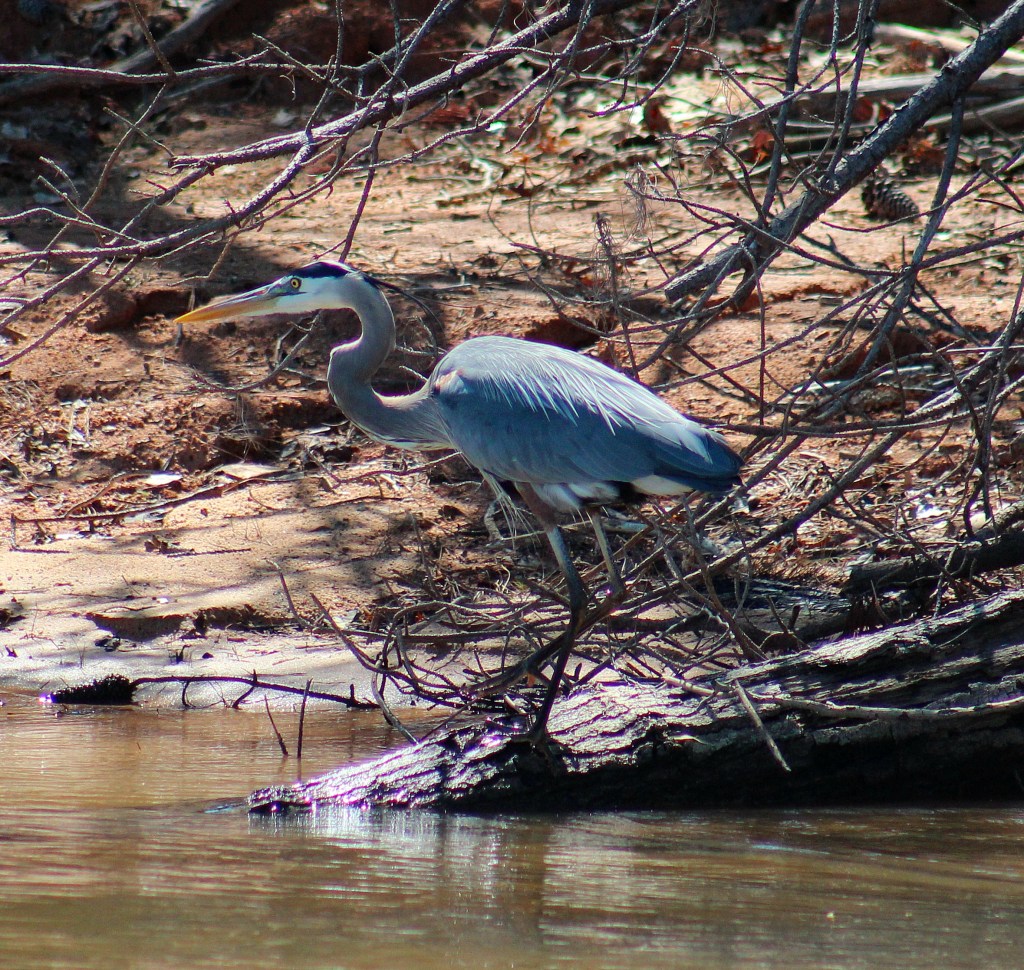 A great blue heron wades along the edge of West Point Lake where a Wildlife River Cruise is scheduled to take place next Saturday. (Submitted)

LaGRANGE – Eagles, osprey, herons, pickerel. These are just a few of West Point Lake’s residents that organizers from the Chattahoochee Riverkeeper hope to see on their annual Wildlife Cruise next Saturday.

The Riverkeepers plan to take locals out on their floating classroom to see and hear about local wildlife next Saturday from experts on fish, birds and the lake as a whole. Brent Hess of the Georgia Department of Natural Resources is scheduled to show passengers live fish using his boat – with the fish to be released following the demonstration – and the Ben Williams from the Army Corps of Engineers is scheduled to discuss wildlife during the event.

One of the major highlights of the cruise, according to organizers, will be the lake’s feathered residents who will be easier to identify this year thanks to an addition to this year’s cruise.

“We really like to focus on birds because it is just incredible the birds we have at the lake, and one thing that is going to be new is we are going to have somebody from the Columbus Audubon Society who is going to come talk about the birds,” said Laura Breyfogle of the Chattahoochee Riverkeeper.

West Point Lake is the home to a variety of birds including osprey, herons and eagles. Several other species of birds – like loons and grebes – migrate through the area and can sometimes be seen near the lake, but the eagles really excite organizers.

“We see that there are three bald eagles that are always going up to this cove right next to Highland Marina, but we haven’t been able to find the nest, and I’ve been told there may be another nest by Beech Creek,” said Breyfogle. “I’ve been up there three times scouting, looking for that nest, but I haven’t been able to find it. … But if you get too close to the nest they will abandon it, so there is probably good reason why no one is telling us where the nests are.”

Even without knowing exactly where the birds are nesting, the group has high hopes for getting to see plenty of birds and other wildlife on the cruise.

“That’s what happened last year,” said Breyfogle. “It was like we had a contract with the birds. They were just flying. As we were waiting to get on the boat the bald eagles were flying around. We had great blue herons flying next to the boat. The eagles were (there). The ospreys were on the nest. Just everything was perfect, so we hope to see that this time.”

According to the Riverkeepers, healthy wildlife population is a sign of a healthy lake, and the group is excited about the progress that they have made on cleaning up the Chattahoochee, and in turn West Point Lake. The group’s annual clean-up removed 23.4 tons of trash from the Chattahoochee last year with the aid of 1,004 volunteers.

“I think it is a great sign of the health of West Point Lake these days and (a sign) that we’ve come a long way from a not as healthy lake decades ago, so this Wildlife Cruise is a great way to see the progress that we’ve made on the lake,” said Jacobs.

Proceeds from the cruise will go towards funding scholarships for local school children to learn about the lake on the floating classroom, water testing and other programs. For more information about the Chattahoochee Riverkeepers visit chattahoochee.org.