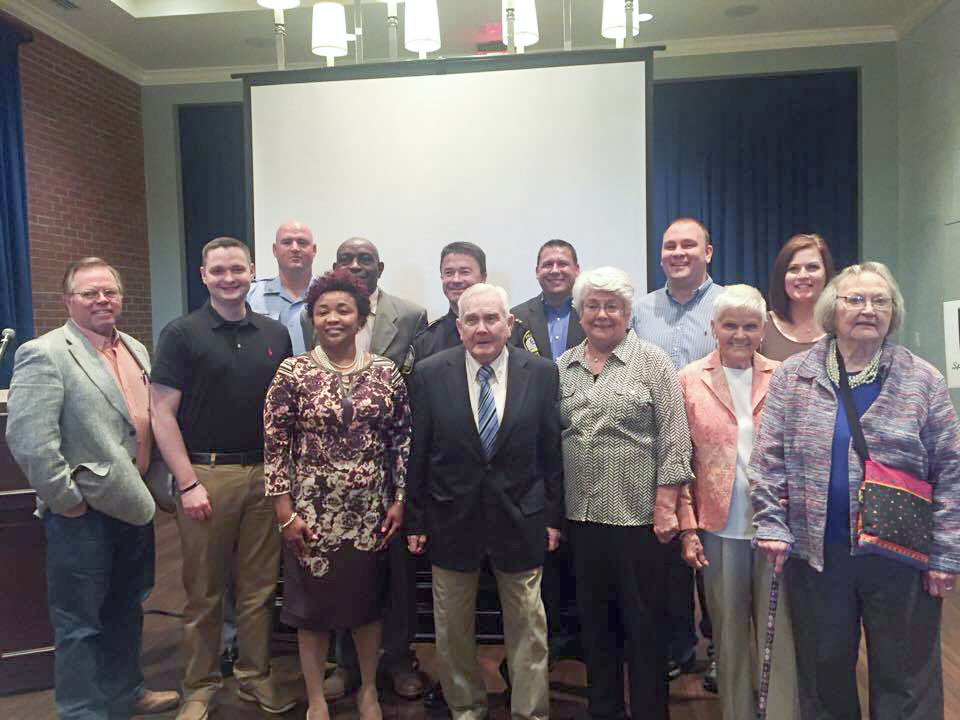 From the local residents who run the food pantries and put on the Christmas parades, to the lawmen who put their lives on the line, all manner of heroes were honored Thursday by the Central Midwest Georgia Red Cross.

The chapter held its annual Heroes Breakfast and recognized 14 individuals from around the area for acts of bravery or just being good, involved citizens.

“The humanitarian spirit is alive and thriving in Troup County,” said Patrick Crews, chairman of the Troup County Board of Commissioners and emcee of the event, which is in its 12th year.

The following heroes were recognized:

Zsa Zsa Heard, director of the LaGrange Housing Authority: Heard was honored after a story about youth in the housing authority went viral last year. The youths came to her looking for jobs, saying they wanted to stay busy and stay out of gangs.

“It’s turned into something else and it’s been great for the guys,” she said. More than that, the effort goes to one of her major goals: get people to see the housing authority as more than just a group of people who don’t want to work.

“The community sees something is going on,” she said. “We want the community to change as much as anyone else.” The youths are back again this spring, planting a garden again, Heard said.

“People were going from church to church getting handouts, and it wasn’t adequate,” Heim said. The churches banded together to form the organization in 2009, which now serves 254 families and has 20 volunteers.

Heim says she’s most proud of the weekend food bags that are sent home with about 70 local students each weekend. Many of those children only get fed a regular meal at school.

“It’s sad in our society we’re not taking care of our children,” she said.

Troup County Deputy Michael Hockett: Hockett was shot in the line of duty on Jan. 9 when he went to perform a welfare check on Matthew Edmondson at a house near West Point. As Hockett arrived at the locked gate at the house, he was met by Edmondson, who fired at him several times, wounding him with buckshot. Edmondson retreated to the house, injured, and was involved in a six-hour standoff with law enforcement before surrendering.

After the incident, Hockett was presented with a new bulletproof vest by the company that provides the sheriff’s office with the equipment, and he was honored by state Rep. Randy Nix, R-LaGrange.

Hockett is now back on the job.

“I will continue to do my job and use this as a learning opportunity,” he said.

Jerry Johnson, president of ERA First Realty of LaGrange: Johnson was recognized for a barbecue he’s put on for local law enforcement agencies for 20 years.

“We said one day, ‘Who in our community never hears thank you?’” Johnson said, and the event began. At first, the law enforcement officers showed up expecting to hear a sales pitch, but the event has grown to be fun for everyone, and even includes door prizes.

LaGrange Police Capt. Mike Pheil: Pheil was recognized for his volunteer efforts with several local agencies, and encouraged others to do the same.

“I like to consider myself more of a conduit, working behind the scenes,” he said. Over his career in LaGrange, Pheil has worked with the United Way of West Georgia, Habitat for Humanity, Harmony House, the Boys & Girls Club of West Georgia and other groups.

Pheil also was involved when the community opened a warming center for homeless residents to have a place to go when the temperature drops below 40 degrees. This year, the city collaborated with New Ventures to have the warming center on Lukken Industrial Drive.

“This community needs more volunteers,” Pheil said. “I would urge you to step up. Take the time.”

Thomas Pike, former Troup County Commissioner and Hogansville City Councilman: Pike was recognized for his efforts in the community, particularly Hogansville, and for being the only known resident to serve on a city council and the county commission.

“Hogansville has a new library and a police station, and I feel like I was part of that,” he said. “I’m proud and honored to have had a positive impact on the community. I’ve always loved politics and I love to help people if I can.”

Montez Sibley and Louise Peavy, community volunteers in Woodbury: The pair was recognized for their efforts to put on special events in the city, from the Christmas parade and tree lighting to other events. Peavy will be 89 later this year.

“If she retires, it’s going to take four people to replace her,” Sibley said.

DeeDee Siggers and Will Wynn: The nurse and man with EMT training both happened to be at the ballpark when a man collapsed and stopped breathing. They performed CPR and operated an AED device on the man until paramedics arrived. He survived and even called Siggers the next day to thank her.

“God put it all in place for me to be there that day,” Siggers said. Wynn said he hopes someone would do the same for a family member of his, if put in the same position.

“When you’re in that situation, seconds count,” he said.

Brad Thompson, pastor of Callaway Baptist Church: Thompson was recognized for his church’s community efforts, including a food ministry, fall festival and Fourth of July celebration.

Brad Turner, Georgia State Trooper: Turner was honored for stopping a Ford F-150 truck on the interstate in Coweta County after the driver was believed to be involved in the kidnapping of two children. Turner was able to arrest the driver and a woman, the children’s mother, without incident and took care of the children, feeding them all the snack food he keeps in his car.

Carlos Whitfield: Whitfield came to the aid of a LaGrange police officer who was attacked by a man on the playground at Lucy Morgan Homes in April. The man had been reported to police for exposing himself to people on the playground, Whitfield said. Whitfield had only gone to the park to investigate some leaks when he came upon the incident.

“It triggered something I didn’t know was in me,” he said, causing him to come to the officer’s aid. He was afraid the man had a gun and would hurt one of the children or someone else.

“I think it’s our civic duty,” to step in and help, he said. “We are our brothers’ keepers. You need to step outside yourself and help people who are hurting.”

Kevin Kelley: The Troup County man was posthumously recognized for coming to the aid of his neighbor, Jill Darda, when she was involved in a vehicle crash on Roanoke Road. Kelley pulled her from her crashed SUV, which had flipped onto its side in the middle of the road.