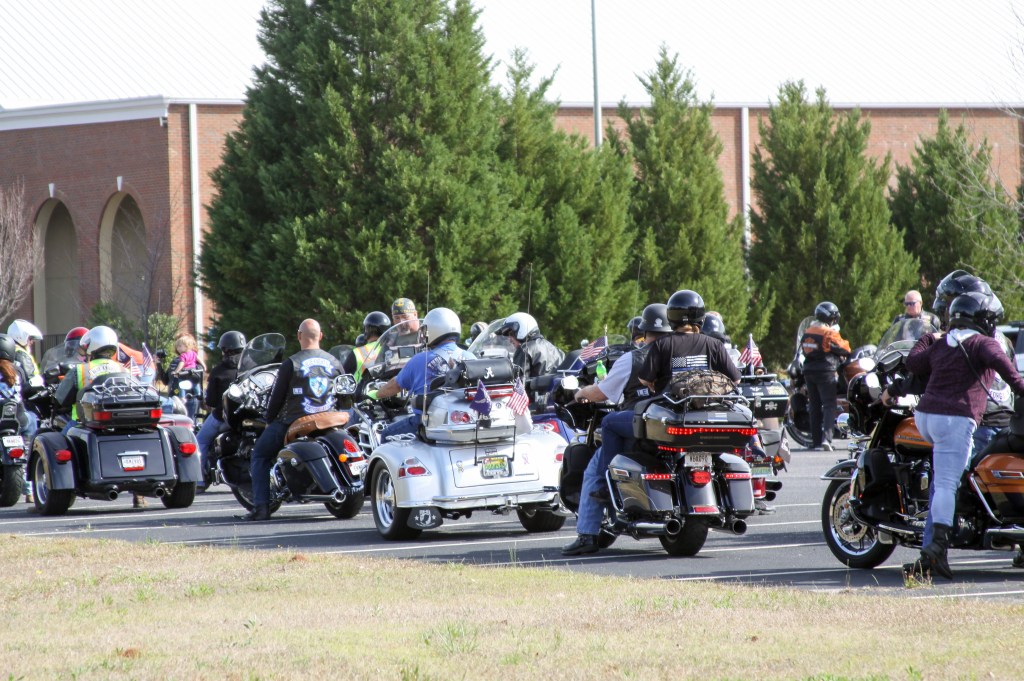 LaGRANGE – More than 50 motorcycles and four Jeeps gathered in the Elks Lodge parking lot on Saturday morning as the Blue Knights of Georgia XVIII prepared to ride out in support of Troup County’s Court Appointed Special Advocate (CASA) program and the local children the program serves.

The Blue Knights is an international law enforcement motorcycle club that has had a chapter in Troup County since 2013. Different chapters of the group adopt different charities to sponsor – with a preference towards children’s charities – and Troup County’s chapter opted to support the non-profit CASA who advocates for children in foster care.

“In 2014… because Blue Knights International do a lot of charity work, and we decided to take on CASA as our charity,” said Chapter President Bobby Conway. “So, this is an annual event, and we are going to do it each year on the fourth Saturday of March.”

This was the ride’s fourth year, and while Troup County’s Blue Knights also engage in other charity acts during the year like gathering toys for local children around Christmas, the ride is the group’s biggest annual event and does the most for the charity that the group has chosen.

“Blue Knights is a law enforcement club, and one of our guys… they worked with the courthouse, so they were exposed to CASA and saw what it did and what good it did,” said Conway.

Even with the generous financial support of the Blue Knights, one of the biggest effects of the ride is just getting the word out about what CASA is and does.

“(The ride) brings attention to our agency because there are still a lot of people who – even though we’ve been in existence for I think 16 years (in Troup County) – there are still a lot of people in the community who don’t know about us,” said CASA Director Katrina Self, who has attended all four years of the ride. “They’ve never heard of us, and it gets the word out to people, and it also raises money because we are a non-profit.”

CASA of Troup County works with children with some of the children in the county who are most in need of someone to speak out for their best interest: children in foster care.

“We advocate for children in foster care,” said Self. “We recruit train and supervise volunteers to do that.”

Like most non-profits, CASA is in need of volunteers to go through training so that they can advocate for the children.

CASA volunteers visit the homes of the children that they are assigned to by the court, form relationships with those children and help advocate the best interests of those children in court.

Fishing for a ‘Miracle’