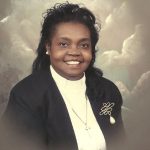 We respectfully announce the passing of Rev. Bradell A. Martin, of 626 West Main Street in Hogansville, Ga. on Tuesday, March 28, 2017.

Bradell Martin was born on August 04, 1941 to  Oscar & Cleotha Allison.  She was born and raised in Hogansville, Ga and graduated West End High with honors at the early age of 16 in 1957. She met the Love of her life and soon married Charlie Frank Martin in 1960.

Bradell was a known seamstress within the community and the surrounding areas. She later became an ordained minister and pastored Newnan Chapel in Newnan, Ga., Roe’s Chapel and Smith Chapel in Harris County. Bradell was one of the first female African American Methodist ministers in the North Georgia District. She paved the way for many more women to achieve the mantle of fully connected ministers.

She was preceded in death by her parents and two brothers, Bennie Allison & Jimmy Dennis.

Condolences may be expressed at www.thrashfuneralhome.com