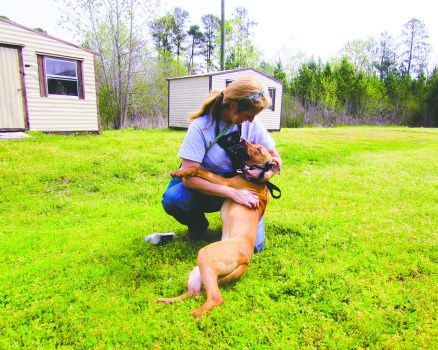 Kathy Ellis, owner of the Hands to Paws rescue group of Augusta, cuddles with a pit bull on Thursday at the LaGrange – Troup County Animal Control. The dog was one of 12 rescued from an alleged dog fighting ring in Hogansville last month. (Photo by: Melanie Ruberti | Daily News) 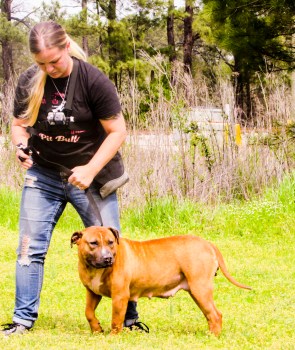 Cherish Danforth, owner of the Brass Knuckles Pin Up rescue group of Augusta, works on training a pit bull to walk on a leash. Many of the 12 dogs seized in the dog fighting raid had never worn a leash, only heavy logging chains. (Photo by: Melanie Ruberti | Daily News) 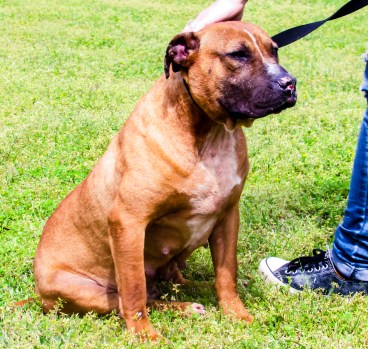 One of the pit bulls patiently waits for the next command by Danforth. The dogs, all part of an alleged dogfighting ring, have gained weight and enjoy being petted by animal control officials, stated Chris Bussey, Animal Services Supervisor. (Photo by: Melanie Ruberti | Daily News)

LaGRANGE – A brown and white pit bull proudly pranced around the back yard of the LaGrange – Troup County Animal Control Shelter on Thursday as if part of the Westminster Dog Show.

The dog was not being evaluated by a panel of judges, but rather assessed by the owners of two separate animal rescue groups.

The pit bull was one of 12 animals rescued from an alleged dog fighting ring in Hogansville last month. Dog fighting paraphernalia, the animals, medications and more were seized by the Troup County Marshal’s Office.

The pit bulls and items were discovered inside two homes located in the 100 block of Woodard Road and the 400 block of South Lee Street.

The dogs were taken to the LaGrange – Troup County Animal Control and checked by a veterinarian. Many of the animals were emaciated, covered in burns and also had wounds associated with dog fighting, according to a police report.

One dog had a broken nose; another was missing a portion of its muzzle, officials said.

“I saw their (dogs) story on Facebook,” stated Cherish Danforth. “I’ve been involved in dogfighting cases before and I wanted to find out their (dogs) fate. I came down here to evaluate each dog and either take them with me or help place them in a good home.”

She traveled to LaGrange with Kathy Ellis, the owner of the Hands to Paws animal rescue group also from Augusta.

The physical appearance of the pit bulls was like night and day.

“All the dogs have put on 10 – 15 pounds,” said Chris Bussey, Animal Services Supervisor at the shelter. “… They like to be petted. It wasn’t something they were used to while living in those two houses.”

“Physically looking at them (dogs), with weight put on … it makes me feel good,” said Deputy Marshal Lisa Lindsey with the Troup County Marshal’s Office. “When we rescued them, they were pretty much skin and bones.”

While the dog fighting case is still an open investigation, the Marshal’s office was awarded custody of the 12 pit bulls last week, Lindsey said.

Law enforcement officials also arrested a second man in connection with the case. Tyrone Mitchell was taken to the Troup County Jail.

Mitchell and Travis Cameron, of Grantville, each face 12 counts of dog fighting and 12 counts of aggravated animal cruelty, Lindsey said.

Since the Marshal’s office has full custody of the pit bulls, Lindsey and Bussey can now focus on finding the animals a forever home.

The animals will be placed with rescue groups who specialize in rehabilitating severely abused dogs.

Bussey and Lindsey said they have been fielding phone calls from organizations around the nation since the story went public on Feb. 16.

“The rescue groups have an assessment they do with the dogs, but there’s a lot of paperwork we do as well … vetting the groups, making sure the dogs are in good shape and up to date on their rabies shots,” Lindsey explained.  “This is not just a five-minute meet and, ‘Thank you for taking the dog.’ We do a lot to make sure the group and the animal are a good match. There’s a lot of people who say they’re a ‘rescue group,’ but they’re not.”

The process also includes filling out a detailed application and a criminal background check, said Bussey.

The assessment process for Ellis and Danforth is just as daunting.

The ladies evaluated each pit bull one at a time. The women took detailed notes on everything from the animal’s temperament to how they walked on a leash, obeyed commands and much more.

Danforth hoped to rescue at least four dogs on Thursday.

“I’ll have them in rehab for about six months,” she said. “We’ll work on aggressive behavior modification, then slowly get them (dogs) socialized with other animals and place them in play groups.”

More times than not, animals who have been severely abused or part of dog fighting rings can be rehabilitated, Danforth added.

A rescue group from Virginia will visit the pit bulls this weekend, Bussey said.

The owner of that organization hopes to adopt at least one dog.