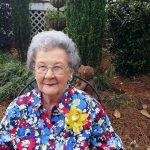 Mrs. Mary Nell Calhoun McWhorter,  age 85,  of LaGrange,  passed away at the WellStar West Georgia Medical Center on   Wednesday, March  29, 2017. Mrs.McWhorter was born on April 26, 1931 to the late Charlie Calhoun and Nellie Singleton Calhoun in Bowden, GA. She was the manager of Kress Department Store here in LaGrange for a number of years. In addition to her parents, she is preceded in death by her grandchild Cindy Bryant and great grandchild, Jennifer Thompson.

Funeral service will be held Friday, March 31, 2017 at East LaGrange Baptist Church at 3:00 p.m. with Rev. Bobby Robinson officiating. Family will receive friends at the church starting at 1:00 until service hour. Interment will follow at Restlawn Memory Gardens.  On line condolences may be sent to the family at www.higginslagrangechapel.com.  Higgins LaGrange Chapel Funeral Home, 706-884-7117.