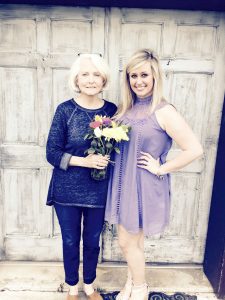 Not only has Evans directed the annual Cub Scout Day camp, known affectionately as Camp Cowpie, for 38 years, she has hosted it in the back yard of her home on John Harris Road for the past 35 years. For her passionate and capable commitment to community youth, which also includes coordinating the DAR’s annual “good citizenship” awards for high school seniors, Evans will be honored as grand marshal of the 2017 Sweet Land of Liberty Parade for Youth.

“Martha Evans epitomizes the theme of this year’s parade, which is ‘Faith, Freedom and Family,’” said Junior Service League president-elect Ashley Mayfield, who is heading up the 2017 parade committee. “We are excited to give the community an opportunity to salute this inspiring woman as we celebrate our nation’s birthday.”

Staged primarily by Junior Service League for the past several years, the parade is “returning to its roots” this year, with a community committee forming to take responsibility for the event. “That’s the way parade founder Annette Boyd organized the first parades, and Junior Service League is pleased to be partnering with community organizations as we work toward making the parade bigger and better this year,” Mayfield said.

Evans’ selection as grand marshal accentuates that goal, Mayfield said, because she and Boyd worked together on several early parades and were friends for many years.

“Annette was my soul mate,” said Evans.  “She was inspired to start the parade after losing her teen-aged son in a tragic accident and always said one of her favorite memories was of watching him march proudly in a July 4th parade when he was a Cub Scout.”

Evans recalls a special year when Annette Boyd was her secret pal in Junior Service League. “At the end of the year, she gave me a small gift, wrapped in a $100 bill and told me to buy something for Camp Cowpie.”

A native of Gainesville, Evans grew up in a scouting family and “got the bug” early.  She never missed a summer at Girl Scout camp, mastering every activity, including latrine digging. As a teenager, she began working as a camp counselor, a role she continued after she entered college at Brenau.

Evans laughs as she recalls her husband Alec’s marriage proposal as the summer of 1969 approached. “I hesitated,” she said, “because I had committed to be a counselor at Camp Ecowee.”

The Evanses worked that out and have been working together on Camp Cowpie and other projects, including the Junior Service League’s popular Attic Sale,  ever since.
“Alex is the wind beneath my wings,” Evans said. “He is the quiet one, always working in the background. I really want to share this honor with him because I could not have done any of this without his support.”

All told, nearly 4,000 Cub Scouts have attended Camp Cowpie since the Evanses began hosting the event. Boys who were their first campers, including sons Lex and Cleve, are now in their 40s, but Evans’ enthusiasm has not diminished.

“She’s so energetic and always plans a new theme for the camp each year,” said Marilyn Huberdeau, a current Cub Scout leader. “One of Martha’s favorites was the Camp Cowpie Junior Rangers, where the scouts learned about our state and national parks. She contacted the U.S. Parks Service and incorporated the Junior Ranger program into our camp. Martha is a tremendous asset to our local Cub Scouts. She goes above and beyond on her unique ideas for crafts and activities for the week.”

“Miss Martha IS Camp Cowpie!” Westbrook said. “We all just love her energy and, year after year, fun, new ideas and themes. She and Alec have stored boxes and boxes of materials for camp so there is always something new for the boys. Her songs she teaches and the well-behaved campers are so fun to watch.”

This year’s theme will be “Bugs,” Westbrook said, and campers will enjoy several longstanding traditions:  the water slide, egg drop, Buddy burners and more.
“What I think is so wonderful is that my children went to Cowpie and now one of my grandsons will be going next year.  Wow! It is truly multi-generational and a true Yellow Jacket District tradition,” Westbrook said.

Evans echoes that thought as she explains what keeps her motivated.

“It’s the boys who come back.  Or I see them out in town, years after they were campers, and they call out a memory of camp.”

One former camper, in particular, moved her to tears.

“My doorbell rang one day and it was a former camper, all grown up, who asked if he could see the camp site.”

They talked as they walked around, each area sparking a different memory, then the young man spoke what was on his mind.

“That were bad things in my life back then,” he said. “Those were the best summers of my life.”

“That’s why we do it,” Evans said. “That’s why I love Scouting and am committed to it. You never know what the experience may mean to a boy.”

She feels the same way about the Sweet Land of Liberty parade, which mirrors scouting with its emphasis on patriotism, service and civic pride.

“I am greatly honored and appreciative of this recognition,” Evans said, “and I am grateful to all the Scout leaders who have helped me through the years.”