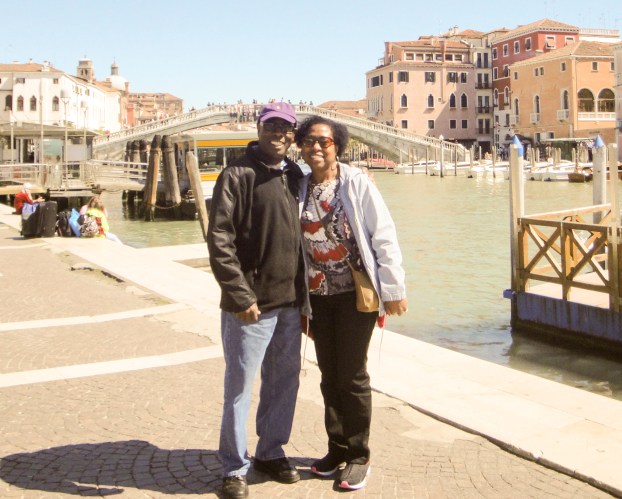 Willie Phearson and his wife Debra pause on vacation in Rome. His life priorities changed in 2012 after he was diagnosed with cancer. When he was declared cancer-free, traveling more became a priority. submitted photo

‘I have a whole new outlook on life’

Willie Phearson always considered himself a positive person, with a positive outlook on life.

“Those first two or three weeks were the toughest time in my life,” he said. He’d be fine during the day at work, when he was around people. At 1 or 2 in the morning, though, he’d wake up and be alone with his thoughts.

That was one reason Phearson, who is a minister, chose Cancer Treatment Centers of America, in Newnan, for his treatment.

Phearson said he actually enjoyed going to the treatment because of the staff, one of whom still sends cards checking up on him.

“The process was totally different from what I imagined it would be,” he said. “It didn’t have the feel of a hospital. It didn’t leave you helpless.”

Phearson was one of the treatment center’s first patients after it opened in 2012 and was declared cancer-free after his treatment. The experience gave him a new outlook on life.

“You can plan for the future, but you also realize life can be a lot shorter,” he said.

After treatment, Phearson graduated from Luther Rice Seminary with a degree in religion and master’s in biblical counseling. He also made it a priority to travel more and some of the habits he picked up at the treatment center – like diet – have stuck with him.

His positive outlook is back and he enjoys leading his church, Greater Mt. Zion Baptist Church in Phenix City, Ala.

“No matter what you’re going through, trust and know God is always there,” he said. “I tell people, faith is not believing he can but knowing he will.”

This week, Phearson is one of the patients chosen to take part in a celebration of life ceremony at the treatment center in Newnan.

During Celebrate Life, each survivor is honored with a ceremonial tree planted in his or her name to symbolize their fighting spirit and hope for years to come. Each celebrant’s name is also added to the “Tree of Life” located in the hospital lobby as a lasting reminder of the courage and strength of cancer survivors, and as inspiration for those in the fight.

“This event brings the entire hospital team such fulfillment. It unites us in the most meaningful way and brings us back to the very reason we do what we do,” said Dr. Brion Randolph, chief of medical oncology, medical director of hematologic oncology and member of the hospital’s opening team. “And this is a milestone year since a majority of our celebrants began treating with us when we opened our doors five years ago.”

Phearson is looking forward to the ceremony.

“I’m excited to celebrate life,” he said. “I want to get back there and share and see people I saw when I was there (for treatment).”