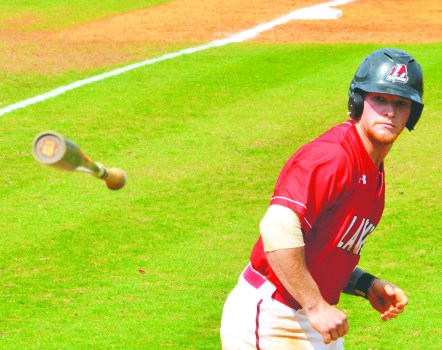 LAGRANGE – He wanted his final season as a college player to be a special one, and that mission has been successful.

Blake Butcher, a slugging third baseman, is a center piece of a LaGrange College team that has been battering the opposition this season.

The Panthers are 29-3, and they’ve risen as high as second in one NCAA Division III poll, and they’re third in another.

“Being a senior, to go out on a winning note like this and string some wins like this together is awesome,” Butcher said. “Every day we come out, and everybody’s excited to be here. It’s just a lot of fun.”

Butcher is a big reason why the Panthers are one of the best teams in the country.

Butcher had a phenomenal junior season that earned him a player of the year honor in the USA South, and there has been no let-up this spring.

On a team with an unforgiving lineup, Butcher has been ripping opposing pitchers to shreds.

Through 32 games, Butcher is second on the team with a .364 batting average, he leads the way with seven home runs, and he’s tied for the team lead with 38 RBIs.

Butcher also has six of the team’s 18 triples, and he is second with 13 doubles.

Butcher has been held hitless in just four games this season, and he owns a 14-game hitting streak.

Butcher, a graduate of Oconee County High, began his collegiate career at West Georgia Tech, and he had stops at Georgia Southern and Flagler before landing at LaGrange College as a junior.

Butcher has enjoyed team and individual success as a Panther, and he’s happy that he’s been able to call LaGrange College home for two years.

“After coming here and having the success we’ve had, it just feels like home,” Butcher said. “It’s been a good time. It’s fun to have family be a part of it.”

On the field, Butcher has been superb for the Panthers.

There has been no drop-off this season, and it helps that opposing pitchers can’t avoid Butcher because of the strength of the LaGrange College lineup.

There are no weak spots in the order, so if teams choose to pitch around Butcher, the next few hitters in the lineup will likely make them pay for that decision.

Fellow senior Casey Bell is a part of that potent lineup.

Bell leads the team with a .386 batting average, and he has three home runs and 38 RBIs.

Another senior, Blane Swift, is hitting .367 with five home runs and 23 RBIs, and James Poropatic is hitting .381 with 25 RBIs.

Tavin Thompson, a Callaway High graduate who like Butcher transferred to LaGrange College last season, is hitting .362 with two home runs and 26 RBIs.

“Usually you have a part of the lineup where you expect some of them to not do as well, but this team, it doesn’t matter who’s up, we have confidence in all our guys,” Butcher said. “We don’t try to put it all on one person.”

LaGrange College will be back home on April 12 for the USA South tournament, and it concludes the regular season with three games against Greensboro.

A year ago, the Panthers didn’t win the conference tournament, and they failed to earn an at-large bid to the NCAA tournament despite their stellar record.

Should the Panthers come up short in this year’s USA South tournament, there’s little doubt they would earn an NCAA at-large bid, but the players would obviously rather not leave it up to a committee.

“We want to go into this (conference) tournament and blow through it and go to regionals and make some noise,” Butcher said. “Our ultimate goal is go to the World Series and win that. We’ve got the team to do it. We’ve just got to keep taking it one step at a time.”