Coleman returns to Chicago for nationals 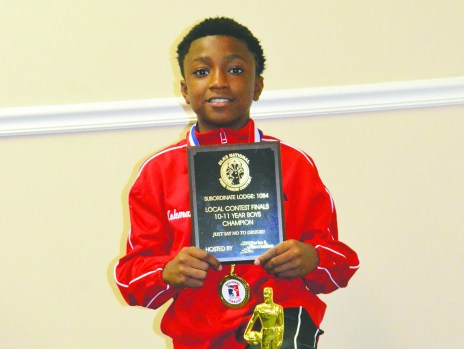 HOGANSVILLE – He’s headed back to Chicago.

Deshun Coleman, a fifth-grade student at Callaway Elementary School, will be in the Windy City for the second straight year to participate in the Elks Hoop Shoot National Finals.

Coleman has won four free-throw shooting competitions to reach the national stage, including the regional finals in Valdosta where he only missed once.

Coleman, who will turn 11 next week, also won tournaments on the county, district and state level before making 24-of-25 free-throw attempts in Valdosta to advance.

The national tournament will be held on April 22, and Coleman will be looking to improve on his 11th-place finish from a year ago.

“This year, he’s been doing a whole lot more practicing than in the past,” said Paulette Coleman, Deshun’s mother. “He’s been practicing, because I think he would really like to win it this year.”

Whatever Coleman is doing, it’s working.

His journey to Chicago began at the Griggs Center when he made 20-of-25 free-throw attempts to win the Troup County competition.

Then it was on to the district tournament in Albany where he made 21-of-25 attempts to advance.

Coleman made 24-of-25 of his attempts at the state competition in Covington, and he duplicated that feat in Valdosta.

“I just get into a rhythm,” Deshun said.

Deshun’s mother said one of his greatest strengths is his ability to keep his cool when the pressure is the most intense.

“Whenever DeShun tends to miss one, it just rolls off his back, and he keeps going,” she said. “He doesn’t show any facial expressions, no emotion. And a lot of the other kids, they tend to get upset, and they don’t bounce back.”

While Deshun is obviously gifted when it comes to athletics, his mother said he also does well in the class room.

“Me and my husband, we are overly proud of him,” she said. “Not only he is a good athlete, he’s also doing well academically. He makes all As and Bs. Anything that he puts his mind to, he’s focused on it.”

Deshun has been playing basketball since he was 4-years-old, and he said he hopes to make the basketball team at Callaway Middle School next season when he’s in the sixth grade.

OF NOTE: Go to enf.elks.org/Greetings to send a message to Deshun.

Each of the participants in the national tournament is listed on the page, and there is a send greeting button next to each of their names.