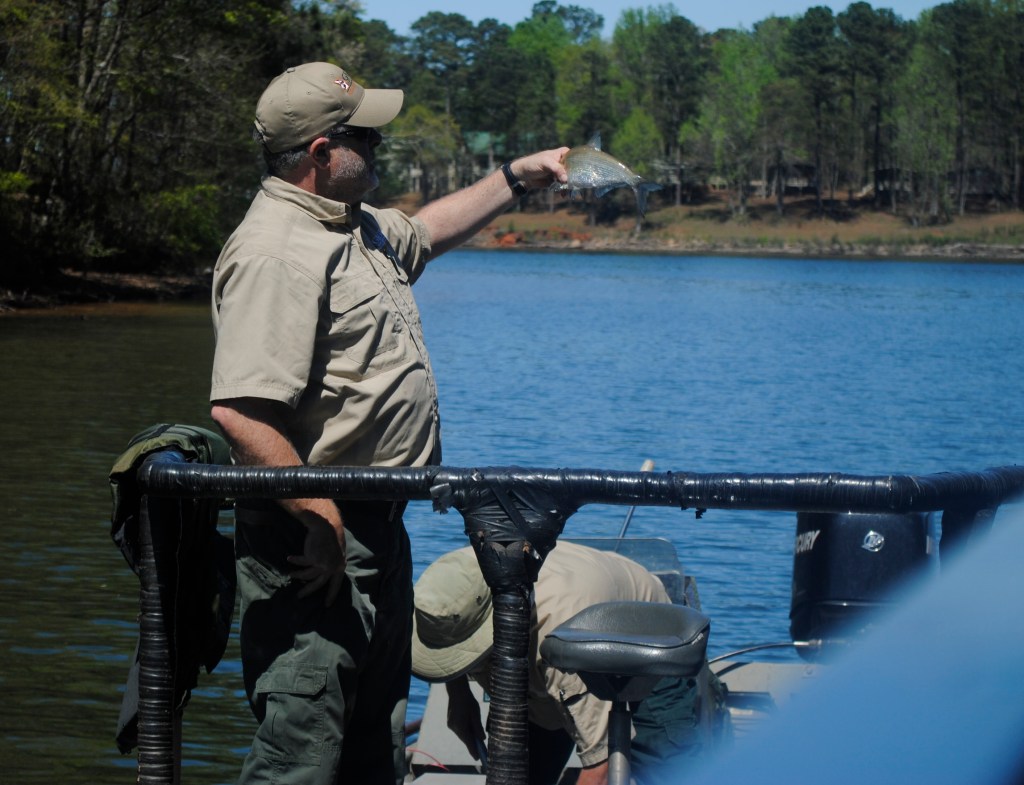 Brent Hess of the Georgia Department of Natural Resources holds a sport fish as he explains to the crowd all the characteristics of that fish Saturday afternoon on the Wildlife Cruise at West Point Lake. (James Simpson II | LaGrange Daily News)

LaGRANGE- Saturday afternoon at The Highland Marina Resort on West Point Lake, The Chattahoochee Riverkeeper held a Wildlife Cruise that showed off many of the fish and birds on the lake, along with displaying the quality features of the lake to people who attended.

The Chattahoochee Keeper is a nonprofit organization started in 1994 that’s dedicated to protecting and preserving the Chattahoochee River, its lakes and tributaries for the people, fish and wildlife that depend upon them.

One of the main reasons of the cruise was to highlight and inform residents about the many species of birds and fish around the West Point Lake area, organizers said.

“We have different species of fish today that I will show you, so I will be able to tell you what kind of fish they are,” said Brent Hess, from the Georgia Department of Natural Resources, as he spoke to the crowd on the cruise boat.

Ben Williams, a registered forester at Chattahoochee Riverkeeper, explained during the boat ride some facts about the history of West Point Lake.

“West Point Lake has over 30,000 acres of land and water. Flood control was one of the main reasons West Point Lake was built. The landscape of the lake has changed overtime but active management is key at West Point Lake,” he said.

Throughout the boat trip, the crowd came across some bald cypress trees that were inside the lake. Those looking close enough were able to see a few bird’s nests secured in the trees, along with a couple of ospreys hoovering around the nest protecting the eggs.

“The bald cypress trees were planted over 40 years ago,” said Laura Breyfogle of the Chattahoochee Riverkeeper.