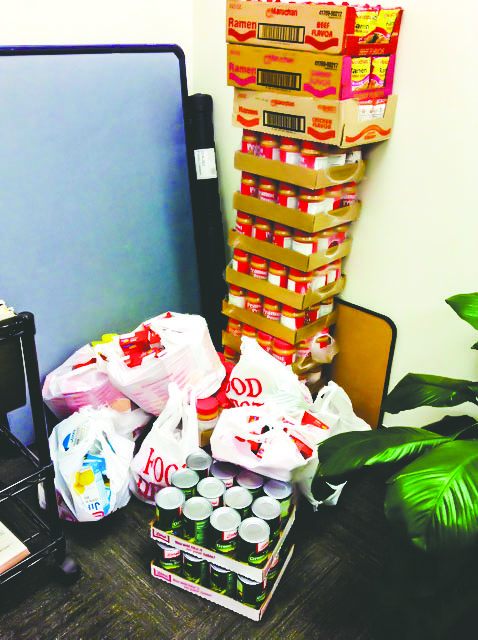 Prosecutors in the Troup County District Attorney’s Office stack up can goods and non-perishable items in a room. Last year, the Coweta Judicial Circuit, including the local D.A.’s office, collected 6,500 pounds of food and raised $1,640. (Photo: File)

LaGRANGE – Troup County Assistant District Attorneys’ will take on a new case next week: fighting hunger in the community.

But prosecutors need help from local residents to achieve a positive verdict.

The Coweta Judicial Circuit, which includes the local D.A.’s office, will participate in the Georgia Legal Food Frenzy starting on April 17. This is the second year the group has joined the fundraiser.

The event pits other judicial circuits around Georgia against each other to see who can gather the most non-perishable food items and acquire the most money.

The court system also accumulated the most pounds of food in Southwest region.

“It was obviously a big success last year,” Adams stated. “It (Food Frenzy) made a big impact here … The food stays within our community. It doesn’t go off to Atlanta. You’re helping to feed people in our area … We want to do that again this year. We (D.A.’s office) don’t do a whole lot. The people in the community are the ones who bring the food.

“I am sure the community will step up again this year and show people why Troup County is the best county,” he added.

This year the Coweta Judicial Circuit hopes to collect 7,500 pounds of food. Those items will then be given to the Feeding the Valley Food Bank for distribution.

“Money goes along way,” Adams explained. “For every dollar someone donates, the food bank can buy and distribute four pounds of food within the county. You can’t do that buying food from a grocery store. Food banks are able to get their items at a highly discounted rate.”

According to Georgia’s Food Bank Network, about one in four children — 28.2 percent — in the peach state do not have enough to eat. The organization also stated more than 1.8 million Georgians need food assistance every year.

“Pete (District Attorney Pete Skandalakis) always tells us (ADAs’) to ‘seek justice.’ But that doesn’t just signify the courtroom,” Adams said. “That also means throughout the community … This is one of the service projects (Food Frenzy) that we do to show the community we are here for them. We will continue to seek justice inside and outside of the courtroom …”

The Georgia Legal Food Frenzy will start on Monday, April 17 and end on Friday, April 28.

Folks can bring their non-perishable food items and monetary donations to the Troup County District Attorney’s office located on the third floor of the courthouse at 100 Ridley Avenue.

Checks should be made payable to Feeding the Valley food bank.

Prosecutors are willing to pick up donated items if folks cannot make it to the courthouse.

Below is a list of food items most needed by the food bank:

Boxed cereals that are low in sugar

Snacks, crackers that are whole grain