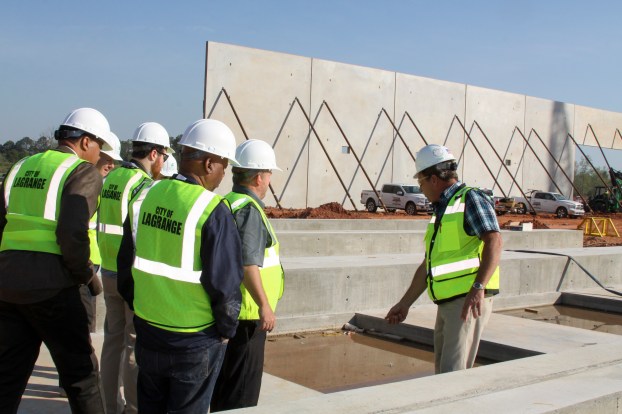 City offi cials stand on the concrete wall that will be lifted up to form part of the inside water park at the Great Wolf Lodge that is currently under construction and plans to open in spring 2018. (Photo by Alicia B. Hill | LaGrange Daily News)

LaGRANGE – City employees and city council members gathered on Tuesday morning to finally get a close up look at the construction going on at 150 Tom Hall Parkway where Great Wolf Lodge hopes to open in spring of 2018.

The resort is now beginning to shape with the first walls of the building that will eventually house the water park rising into place this week. Additionally, the first floors of the hotel are beginning to take shape as well as the beginnings of the conference center, the indoor amusement area and even the parking lots.

“It was a dustbowl, as you know, when we started here back in August, but then right around Thanksgiving we started getting rain, and it seems like here we’ve probably been getting two to three days a week (of rain) since November,” said General Superintendent Bobby Langdale. “It is starting to dry up a little, but we want to start putting crushed stone down in the parking lots, and then we want to start the first part of next week putting some binder course down for asphalt, and then leave the topping off and do that at the end.”

According to Langdale, the project should be on track to finish in time for 2018’s summer season, and even with the wet weather the project has continued to move ahead at a steady pace. Councilmembers were excited to see the project’s progress, and expressed hopes that the lodge will bring positive growth to the city and county.

Some citizens have expressed concerns that the water park that will only be open to hotel guests will not attract enough people, but after reviewing the progress of the chain’s other locations, councilmembers are far more optimistic of the lodge’s success.

“I think in a few years (citizens will) say, ‘We’re glad that this came,’ because this hotel – along with the hotel downtown and the amphitheater – all of this is coming together, and with the property downtown, we are going to see some changes,” said Edmondson. “I think they are going to be positive changes by local business owners as well as our hotels and the city of LaGrange.”

The council also noted that the teams and families visiting for the Spring Sports Festival that begins today will get a chance to see what LaGrange has coming and will hopefully return later when both the Courtyard by Marriott and the Great Wolf Lodge are open. That concept of returning visitors is a large part of what helped bring the lodge to LaGrange in the first place.

“This morning also the chamber (of commerce) awarded their tourism visionary award to Gov. (Nathan) Deal because without his support for that Great Wolf project, it would have been very difficult to make it happen, but one of the things they pointed out was that under the terms of that tourism grant, they had to justify that over 25 percent of their occupants would come from out of state,” said Mayor Jim Thornton. “… In terms of bringing a hotel, motel tax, restaurant business and all of that, you are really expecting to see a lot of people coming and visiting the community.”

The hotel is designed to feature six restaurants including a pizza parlor, an ice cream shop, a wine bar and a steak house as well as shopping, all of which will be open to the public.

For more information about the resort or a virtual tour of the resort visit https://www.greatwolf.com/georgia

LaGRANGE – Less than an hour after returning from a walk through at Great Wolf Lodge, LaGrange City Council began... read more