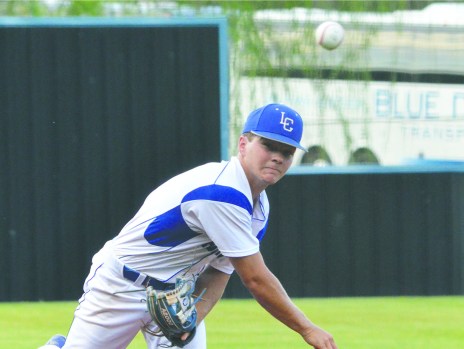 LAGRANGE – They’re back on track.

The LaGrange Grangers, after losing a heart-breaker to the rival Troup Tigers on Tuesday, bounced back for a 4-2 victory over Central-Carroll on Thursday in a Region 5-AAAA baseball game.

LaGrange improved to 7-2 in the region, and it is tied for first place with Troup, which didn’t play on Thursday.

LaGrange has three region games remaining, beginning with today’s showdown at Cartersville, which is in third place in the region.

The Grangers fell behind 2-0 in Thursday’s game, but they rallied for three runs in the fourth inning and one more in the fifth to get the come-from-behind win.

“The bottomline is we have to come out and execute, and we executed a lot better today,” said LaGrange head coach David Smart. “We did some things better. We bunted the ball a lot better. That was really big for us.”

The Grangers got a strong pitching performance from Cole Freeman, who went five innings and gave up two unearned runs.

Central-Carroll scored two runs in the second inning, but it was held scoreless the rest of the way by Freeman, as well as John Morgan who threw two scoreless innings to finish it.

“Cole did a good job,” Smart said. “He kind of settled in there, and after that second inning kind of got into a rhythm and was able to get some quick innings for us and get us back in there, and get us some momentum. So that was important. That was big.”

Morgan was the starting pitcher in an earlier game against Central-Carroll, and he struggled bit, giving up a pair of early home runs.

Morgan was much more effective in the rematch.

“John’s been real solid,” Smart said. “He goes into Loganville the other day and does really well. And Central, the first time he threw against them, they roughed him up. He gave up two two-run homers in the first inning. For him to come and bounce back like that, it shows a lot about his mettle.”

Offensively for LaGrange, Matt Anderson was 2-for-3 with a pair of runs scored, and Hunter Plant had a hit and an RBI.

Champ Willis drove in a run with a sacrifice fly, Ben Anderson had an RBI, and David Sweat had a hit, a walk, and he was hit by a pitch.

Jacob Vinson also had a hit for the Grangers.

After today’s game at Cartersville, LaGrange finishes its region schedule next week with games against Sandy Creek and Chapel Hill.

If the Grangers win all three games, they’d finish no lower than second in the region, meaning they’d be at home for the first round of the state playoffs.

If LaGrange wins out and Troup loses, it would be the region champion.