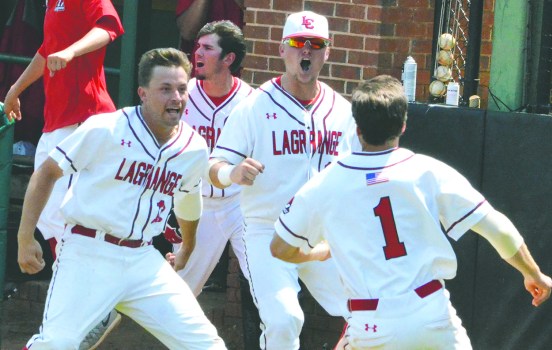 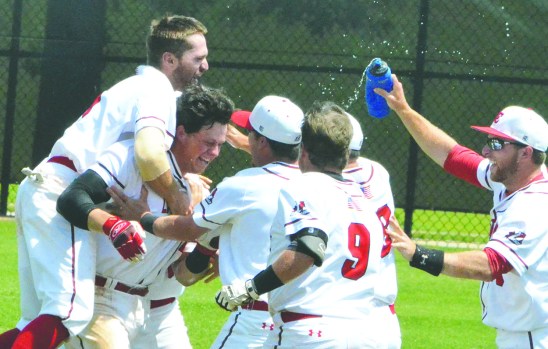 The LaGrange College Panthers, thanks to a game-winning, walk-off bunt by Cain Sauls, outlasted North Carolina-Wesleyan 2-1 on Friday in the USA South baseball tournament.

LaGrange College (34-4) improved to 3-0 in the tournament, and it will play Piedmont in the championship game today at noon.

The Panthers’ normally prolific offense was held in check, but they were in the game thanks to the excellence of their two pitchers, Richie Post and Austin Perez.

As the Panthers came to the plate in the bottom of the ninth inning, they and the Battling Bishops were locked in a 1-1 pitcher’s duel.

Tavin Thompson began the rally with a first-pitch single to center field, and Casey Bell followed with a sacrifice bunt.

After Blake Butcher was intentionally walked, Blane Swift hit a pop-up that landed just over the pitcher’s head for an infield single, and the bases were loaded.

That brought Sauls to the plate, and after working the count to his favor, he knew he was going to get a pitch he could handle.

“I got ahead in the count 2-1, so he’s not going to want to go 3-1 with the bases loaded,” Sauls said. “I knew a strike was coming. And he’s a lefty falling off, so I knew if I could get it to the right side of the field, that Tavin was going to be walking in.”

He pushed the bunt to the right side of the infield, and North Carolina-Wesleyan’s defense had no shot, and Thompson crossed the plate with the running run, and the celebration was on.

LaGrange College head coach David Kelton said Sauls is an exceptional bunter, so he had no problem calling for the squeeze play in that situation.

“I’ve got all the confidence in the world that Cain would have got up there and drove the ball deep into the outfielder, but he’s also a great bunter,” Kelton said. “We don’t bunt him much, but his technique’s about as good as it comes.”

It was a struggle, but the Panthers won the game, and that’s all that matters this time of year.

“It wasn’t pretty,” Kelton said. “We didn’t have a lot of good at-bats. But we found a way. You’re not always going to be able to get the 10 hits, and the eight or nine runs. More importantly, the guys found a way. It’s one of those where you take a win and go.”

For the third straight tournament game, the pitching was on target for the Panthers.

Post got the call for Friday’s game, and he was in command, throwing seven innings while giving up five hits and one run with eight strikeouts.

“He’s special,” Kelton said. “He had surgery back in June, labrum surgery, so we tried to protect him all year long. To be honest with you, the plan going in was he was going to help us in the bullpen this year. But we gave him a spot start, he showed that he was ready. We had him on a pitch count, and we’ve slowly been able to progress him until today we took him over 100 pitches for the very first time.”

In a tie game, Kelton turned the game over to Perez in the eighth inning, and the right-handed junior threw two dominant innings.

“He commands his fastball,” Kelton said. “He’s as tough as anybody.”

The Panthers took the lead with a run in the bottom of the third inning.

Jackson Patrick reached on an error leading off, Joe Pradat had a sacrifice bunt, and Thompson came through with a two-out RBI single.

The Battling Bishops answered with a run in the top of the fifth inning on an RBI single by Cedrick Kornegay, and it remained deadlocked at 1-1 until the decisive ninth inning.

Thompson had three of the Panthers’ six hits, Swift had two hits, and Sauls was credited with a single on his ninth-inning bunt.