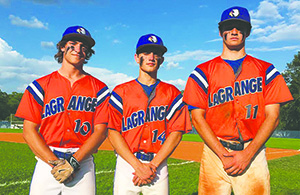 In a region showdown, it was LaGrange Academy rolling to a 15-0 victory in a game shortened to three innings because of the run rule.

LaGrange Academy, which lost to Brandon Hall 12-2 earlier this season, improved to 1-2 in the region.

“That’s a real confidence booster,” LaGrange Academy coach Brandon Lybrand said. “One of the things we’ve been struggling with is our hitting, and today they figured out that when you swing the bat, good things happen. We were real pleased with the way we hit the ball today.”

Mason Brown pitched all three innings and was sharp.

“He limited his pitches, so that way he can come back Thursday and pitch (against Flint River), which is a plus,” Lybrand said.

A number of players contributed to the offensive outburst, including senior Nick Keating, who had an inside-the-park grand slam.

“Evan (Smith) had a huge hit that broke the game wide open,” Lybrand said. “Matthew (Morgan) really started us off. He had a really good game. Mason had a big hit that helped himself out. We all put the ball in play.”

It was a big win for the Warriors, who have put themselves in position to earn one of the region’s four playoff berths.

Leading the way for LaGrange Academy are the three seniors, Keating, Brandon Haynes and Jake Keeble.

The Warriors took their lumps early in the season, but they’re starting to find their form, as they showed with Monday’s blowout win.

“Our bats have come around,” Haynes said. “We swung the bats a lot today.”

Haynes said he has tried to be there for his younger teammates when they need a helping hand.

“I’ve tried to help out when I can, give them little tips,” Haynes said. “But it’s mostly the coaches. They’ve done a great job.”

Keating said some of the lumps the Warriors took may have been a blessing in disguise.

“I think we had to take a few losses to understand what we needed to do,” Keating said.

Keeble said all of the players are on the same page.

“It took a lot for us to get where we are,” Keeble said. “We’re communicating a lot more. Not only that, we’ve gotten to where we can pick each other up, and not letting teams get to our heads. Like today, we didn’t let it get to our heads.”

“We were in the fourth inning, and they were up 1-0,” Lybrand said. “So we were playing great, and unfortunately, we made some mistakes in the field. If we limit that, we’re a good team, and I think we can really compete.”