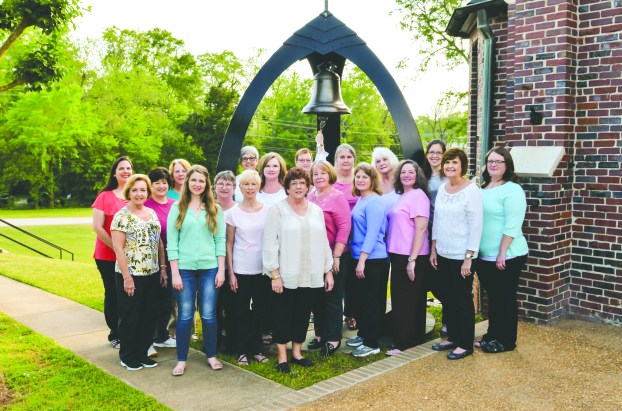 The Bel Canto LaGrange Women’s Ensemble rings the bell in front of St. Mark’s Episcopal Church. The vocalists will perform there next Sunday, April 30. (Photo: submitted)

An afternoon of poetry and song

The famous lines of Emily Dickinson, Robert Frost, Sara Teasdale and more will be set to melodic tunes and performed by the Bel Canto LaGrange Women’s Ensemble next weekend.

The group, which is a part of the Choral Society of West Georgia, will take their audience on a lyric and emotional journey during their last concert of the season, titled, “Through the Poet’s Eyes.”

“There are certain poets that composers seem to gravitate towards, like Emily Dickinson,” explained Bettie Biggs, artistic director of the Choral Society of West Georgia. “We’ll perform a song based on her poem, ‘Heart, We Will Forget Him.’ She was a reclusive person, so to have her write this passionate poetry is really interesting.”

Other poems that will be highlighted during the Bel Canto concert include: “In the Bleak Midwinter,” by Christina Rossetti, “My Love is Like a Red, Red Rose,” by Robert Burns, “A Girl’s Garden,” by Robert Frost, “A Knight’s Tale,” by Sara Teasdale and many more.

Cathy Wright Hunt will be the special guest commentator and will read small snippets from the poems featured in the concert.

The musical pieces presented by the Bel Canto vocalists will be in stark contrast to the songs they belted out during their last performance.

“We did a Broadway concert in February and I wanted them to have a little more serious content this time,” Biggs explained. “… this is something different and unique. These are prolific poets that people use all the time.”

In addition to the ensemble’s traditional musical accompanists’, Cindy Brown on the piano and Ken Bailey playing the organ, the concert will also feature pieces on the classic guitar and violin.

Sam Lee, an accomplish violinist, will perform with the ensemble, as will Patrick Hunter Rice, an award winning classic guitarist.

The two musicians will be showcased during a duet of the Hungarian – Gypsy song, “Czardas.”

“There is a unique twist to this concert,” Biggs said. “You don’t hear a lot of classical guitar in this area. The program is very diverse … and the icing on the cake is having Cathy Wright Hunt, a former English teacher and fan of spoken word, be our guest narrator. This is a nice way to spend a Sunday afternoon.”

The Bel Canto concert is the fifth performance for the women this season, Biggs stated. It will be the last one until the new choral term starts back up in the fall.

“It can be exhausting,” she said. “There is a lot of preparation work and numerous rehearsals … all that takes up an enormous amount of time. But these women have stepped up to the plate and worked hard on this concert. They should be applauded and commended for their work.”

There will be a reception for Bel Canto and the audience immediately following their performance.

“Through the Poet’s Eyes” will take place next Sunday, April 30 inside the sanctuary of St. Mark’s Episcopal Church located at 207 N. Greenwood Street.

Tickets cost $15 apiece. The price includes entrance into the reception which will also be hosted at the church.

Tickets can be purchased at the Market Place and Plum Southern shops in downtown LaGrange. They will also be sold at the door of the performance.

Anyone wanting more information can email the Choral Society of West Georgia at choralsocietyofwestgeorgia@gmail.com or contact them at 706-882-2734.

LaGRANGE – For months, financial reporters have been talking about how the nation has been recovering from the recession that... read more