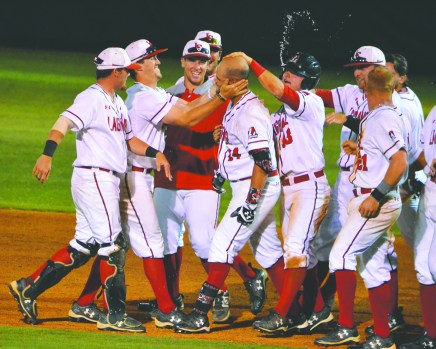 LAGRANGE – It’s one more for the record.

The LaGrange College Panthers improved to 36-4 with Friday’s dramatic 6-5 win over Greensboro, and they’ve tied the program record for wins in a season that was set in 2003.

This team will have a chance to break the win record today.

LaGrange College wraps up the regular season with a doubleheader against Greensboro, with the first game set for 2 p.m.

After that, it will be on III national tournament for the Panthers.

In Friday’s game, it was tied 5-5 when LaGrange College came to the plate in the bottom of the 10th inning.

Casey Bell began the rally with a base hit to left field, and Blake Butcher followed with a single to right field to put men on first and second.

Butcher fouled off a pair of two-strike pitches before hitting a flare to right field.

Blane Swift then put a perfect bunt down for a single, and the bases were full for Billy Peatross.

After swinging and missing on the first pitch, Peatross drove the next pitch deep to left field.

The ball was caught, but the outfielder had no chance to make the play at home, and pinch-runner Grant Perry scored easily, and the Panthers celebrated another victory.

Jonathan Fleckenstein pitched the final two innings to get the win and improve to 6-1.

Fleckenstien gave up the tying run in the top of the ninth, but he threw a perfect 10th inning with three straight strikeouts.

The Panthers were down 2-0 when they tied it with a pair of runs in the bottom of the fifth.

James Poropatic drove in Chad Pigg with a triple, and he scored on a balk to tie it.

Greensboro built a 4-2 lead with single runs in the sixth and eighth innings, but LaGrange College took the lead with three runs in the bottom of the eighth.

After Tavin Thompson scored on a wild pitch, Cain Sails delivered a two-run single to give the Panthers a 5-4 lead.

Greensboro rallied to tie it in the top of the ninth, and LaGrange College won it in the 10th.

Bell, Butcher and Chad Pigg each had two hits for the Panthers.