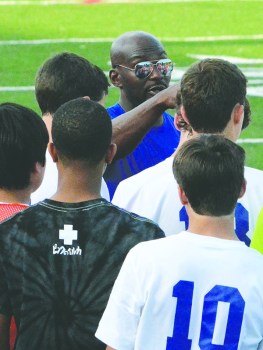 Keita Placide has been the boys’ soccer coach at LaGrange High for 11 years, and he’ll be stepping down from that position following this season.

Placide is hoping that doesn’t happen for a while.

LaGrange, after finishing second in Region 5-AAAA, will host Chestatee today in the opening round of the state tournament at Callaway Stadium.

The winner of today’s game will play either Hardaway or Richmond Academy in the round of 16 next week.

“They seem to be a very solid team,” Placide said of Chestatee. “Although they finished third in their region, it’s tough. So I expect the equivalent of a Cartersville. Cartersville lost to them 2-1, and I believe it was on penalty kicks. So I expect it to be a good, solid game. It will show their mettle.”

Outside of that setback, it has been mostly smooth sailing for the Grangers (12-2-1), who have won 11 of their past 12 games.

LaGrange followed up the loss to Cartersville with wins over Hardaway, Northside and Kendrick.

LaGrange’s defense has been getting it done since Day 1, and the team has only surrendered nine goals.

“We’ll see how it goes,” Placide said. “I’m ecstatic about (our chances). We’re just putting the last-minute touches on it.”

Placide has enjoyed tremendous success during his tenure as the Grangers’ head coach, and his teams have won multiple region championships and twice reached the quarterfinals of the state tournament.

“I’ve truly loved my years working at LaGrange,” Placide said. “It’s like a family there. It never felt like work honestly. You come out here, and the kids love what they’re doing. You have good support from parents, as well as the school. They allow me to coach, and that’s what I do.”