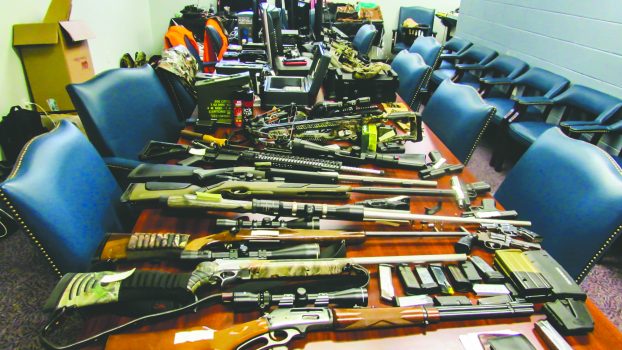 Investigators seized around $75,000 worth of weapons, electronics and other items from the home of Quintavious Lantwane Gray. Gray is now being indicted for his part in alleged crime spree that spanned four counties, including Troup County. (Photo: File)

A Troup County father was indicted by a grand jury earlier this month for inappropriately touching two of his daughters.

According to the indictment, the man allegedly had sexual relations with one of his daughters from December, 2000 through May, 2004.

The father also allegedly inappropriately touched a second daughter between May 2014 and May 2015, the document stated.

The man was arrested in March and was recently denied bond by a Troup County Superior Court judge.

The Daily News chose to not reveal the identity of the man to protect his children.

Quintavious Lantwane Gray, 21, was also indicted in April for his role in an entering auto and theft ring around Troup County.

The document stated between July and December of 2016, Gray reportedly took or received at least nine guns that he knew were stolen.

The weapons ranged from a .40 caliber handgun Smith & Wesson to a .308 Bushmaster customer rifle to a Taurus Judge revolver and a 9 mm hand gun, just to name a few.

Gray allegedly stole some of the firearms after breaking into vehicles, the indictment stated.

Gray allegedly confessed to TCSO investigators about his role in the crime spree.

“He did confess to being the mastermind (of crimes),” the chief investigator said. “He confessed to committing more than 1,000 entering autos … in the past five to six months.”

Gray also reportedly hit vehicles and homes within the cities of LaGrange, Newnan and Senoia, according to Caldwell.

TCSO estimated the agency seized around $75,000 worth of items from Gray’s home.

Tecory Daniels, 27, Dorothy Lawrence, 43 and Tyrone Gray, 23, all of LaGrange, were also arrested for their part in the crime spree.

Library asks for money to keep lights on

LaGRANGE – Sometimes even blessings are mixed. Troup County’s libraries are coming to find the truth in that fact as... read more